Top plastic polluter Senegal pledges to clean up its act 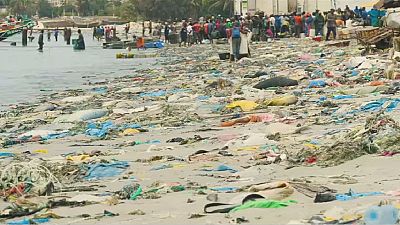 For more than 10 years Senegalese eco-warrior Modou Fall (the ‘a’ pronounced like it is in stallion) has been fighting to change people’s habit of throwing plastic waste out into the streets with no concern for its effect on the environment.

Covering himself in used plastic bags he regularly visits schools and teaches children about the importance of rejecting the use of plastic and explains to them that it all ends up in the ocean and kills wildlife.

For him saving the planet and the oceans from plastic pollution starts very young and at home.

“All the disasters you see around the world, it is a lack of willingness. People need to know that the state can’t do everything because is is not the authorities that bring all of this (waste) here, it’s the people. It is their place of work, it is their dumping ground, it’s here they do just whatever,” said Fall.

Environmental group Greenpeace says it is not enough to rely on individuals to keep the environment clean. They want the government to impose a total ban on single use plastic and packaging.

Greenpeace say pollution from this waste “has reached a critical level” and figures from the United Nations Environment Programme (UNEP) shows the equivalent of a plastic truck enters our oceans every minute.

At stake in Senegal is the fact that the government did ban the single use plastic bags of less than 30 microns in 2015.

Yet it continues to be an integral part of the urban landscape flying around in the streets of major cities in Senegal, entangled in bushes and littering the beaches and coastline of Dakar.

They are widely used by small vendors, sandwich shops and street canteens, markets and even the supermarket vegetable and cheese counters.

Environment Minister Abdou Karim Sall admitted this month that the government had failed to apply the law.

After a month of talking to citizens about the law and the harmful effects of plastic, police officers will start going to shops and handing out fines of up to $85 to those that are still handing out thin plastic bags.

Figures in Our World in Data compiled by Hannah Ritchie and Max Roser show that Senegal produced over 250,000 tons of mismanaged plastic waste in 2010, making it the 21st biggest ocean polluter in the world, among richer, more populous countries such as the United States or India.

The figure is expected to rise three-fold by 2025, according to researchers.

“There was a delay when the law was voted, a delay given to importers, a delay given to producers but also to everyone in the industry, the resellers and so on. But we have deemed necessary to speak to the people, to make them aware of the negative impact of plastic on our environment,” said Sall.

This contrasts with Kenya, Rwanda and Cape Verde, which have imposed severe restrictions on the use or manufacture of single-use plastics. Senegal is amongst those countries that in reality rely on voluntary systems to the use of flimsy plastics.

Africa is leading the charge against plastic pollution, with 34 countries adopting restrictions on plastic bags.

In 2017, Kenya imposed one of the world’s toughest bans on plastic bags, with charges of up to four years in prison or $40,000 in fines for producing, selling or even using them.

But the lack of enforcement by Senegalese authorities of its own law has left citizens fending for themselves. And the lack of a strict policy on plastic means large businesses continue to use plastic wrapping which they would not be allowed to do in some of the other countries they operate in.

French supermarket chains Auchan and Carrefour operate in Senegal. Legislation in France prohibits them from giving plastic bags to their customers. But they are still available at the counters of the Senegal shops.

Auchan’s head of communication in Senegal, Assietou Drame (pronounced Dramay), says the company works within the legislation of the 17 countries they operate in but insist they don’t freely dispense the bags in Senegal – they charge for them.

Drame says Auchan plans to pilot the use of brown recycled paper bags they call ‘Kraft’ by the end of the year. But to begin with, customers will continue to have a choice between paper and plastic.

“We have a project to always offer an alternative for our clients, we want to put in place the ‘Kraft’ bag project (paper bags). So today the objective is to try in selected stores within Dakar to completely eliminate the sale of plastic bags and to offer our clients the ‘Kraft’ bag in order for them to shop in a cleaner way,” Drame said.

Auchan’s competitor, Carrefour, which operates in Senegal, Cameroon and Ivory Coast, says it gives out textile bags in its Dakar stores but stocks have momentarily run out.

The owner of Copa Cabana bar and restaurant in Dakar’s Virage neighbourhood, Babacar Thiaw, (pronounced like the Italian Ciao- TchAw) does not want to wait. He is preparing to be ‘zero-waste’ by September investing in a new coffee machine that doesn’t use capsules, he has already substituted plastic straws with metal ones and will soon buy a water fountain for use with glass bottles and get sugar in bulk to replace individually wrapped paper sachets.

Thiaw is one of several people and organisations that have come together at neighbourhood level for ‘set setal’, the Wolof language name for cleanup operations which regularly take place on beaches and streets.

Thiaw believes that if businesses wait for the government to take appropriate action, change will never happen.

He says the view from his restaurant every morning is as a testimony to people’s total lack of interest in saving the environment.

“Look at the beach how beautiful it is, but at 1 pm, 2 pm, you come back and it looks like a dumping ground because people bring their products and their plastic and they just throw it anywhere,” he said.

“The law to ban plastic was voted in 2015 but until now it has had no effect at all, nothing concrete has been done. People talk about laws and everything but I feel that those who vote the laws, do they really understand what is happening on the ground?” he said.

Sciencedirect.com says at the global level, best estimates suggest that approximately 80 percent of ocean plastics come from land-based sources, and the remaining 20 percent from marine sources such as fishing activity and including fishing lines, nets and ropes.

The most well-known example of large plastic accumulations in surface waters is the so-called ‘Great Pacific Garbage Patch’ (GPGP).