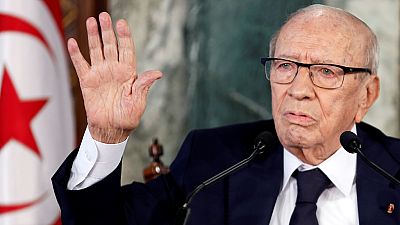 Tributes continue to pour in following the demise of Tunisian President Beji Caïd Essebsi on Thursday.

In a statement, the French President Emmanuel Macron described the late Essebsi as a “courageous leader” and “friend” of France.

Many Tunisians also reacted to the death of their first democratically-elected President.

May President Essebsi rest in peace and may God give patience to his family. This is a great loss for Tunisia.

“He started his mission on a positive note and completed it in the same way. May he rest in peace. His predecessors hurt the country. Beji was a good man and he has revived the country. No one did it before him, no one!’‘, Ahmed said.

A few hours after his death, Mohamed Ennaceur, Speaker of the Tunisian Parliament, was sworn in as interim president as stipulated in the Constitution.

He will assume the functions of his predecessor until the next presidential election. The elections which was supposed to be held on November 17 will now happen on October 23.

“The Tunisian government has given a strong image of the peaceful transfer of power, which has taken place in a peaceful and civilised manner. We want to show an image of ourselves united, so the Tunisian people must forget their differences. May President Essebsi rest in peace and may God give patience to his family. This is a great loss for Tunisia”, the Tunisian Prime Minister said.

He will have to organize a presidential election in order to respect the time lines set out by the Constitution.

Tunisians protest Trump's 'Deal of Shame,' call for boycott of US products

Tunisians protest Trump's 'Deal of Shame,' call for boycott of US products