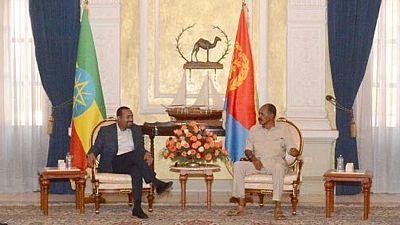 “The two sides will discuss further enhancement of the all-rounded cooperation between the two countries as well as regional and other matters of mutual interest,” the Eritrean Information Minister said in a tweet.

The Ethiopian delegation which will be spending two days in Eritrea includes Finance Minister Ahmed Shide, CEO of Ethiopian Airlines, Tewolde Gebremariam and other government officials.

Abiy was received at the Asmara International Airport by Afwerki along with other top government officials including Yemane Ghebremeskel, a presidential advisor.

Incidentally, the visit coincides with the one-year anniversary of the resumption of flights between Addis Ababa and Asmara, an offshoot of the July 2018 peace deal that ended two decades of “no peace – no war” standoff.

Aside the resumption of flights, other key incidents that followed the peace deal include the reopening of phone lines, the reopening of multiple border points – all of which have been closed unilaterally from the Eritrean side according to reports.