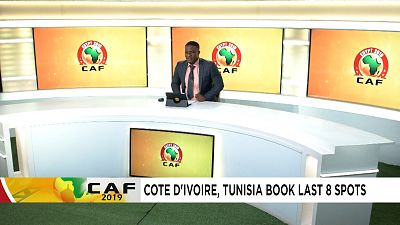 The best eight teams on the continent are now known, welcome to yet another edition of the Special AFCON show on Africanews bringing you all you need to know in Egypt.

The elephants continue their march into the last 8 of the Africa Cup of Nations with a solitary goal in their match in Suez.

Wilfried Zaha’s 76th minute strike was the difference in seeing Cote d’Ivoire overcome a plucky Malian side who dominated everything but for the scoreline.

As was expected the game in Suez was a very physical affair ensuring the west African derby lived up to its tag.

It was a game of two halves, with both sides drawing blank in the first half but the elephants lifted up their game and got the all important goal to book a date with the desert foxes of Algeria in Thursday’s quarter-final encounter.

Meanwhile in Ismailia, the Carthage Eagles of Tunisia ended their atrocious record of not beating the Black Stars of Ghana in any AFCON match. Tunisia brushed aside Ghana by winning 5-4 on penalties to book a quarter-final spot where they will face surprise debutants Madagascar on Thursday.

After more than 120 minutes both teams could not be separated after the scoreline ended 1 goal apiece. Tunisia’s Taha Khenissi scored in the 73rd minute to put his side ahead but Ghana drew level deep in added time through a Rami Bedoui own goal.

Nigeria, Cote d’Ivoire, Benin, Senegal, Algeria, Tunisia, South Africa and Madagascar let’s take a look a the last eight nations standing at the 2019 Africa Cup of Nation in Egypt. West Africa is the sub-region with the highest number of representatives 4, North Africa’s torch bearers are Algeria and Tunisia, while South Africa and Madagascar represent Southern Africa.

And here is how they square up in the quarter finals

On Wednesday the Teranga Lions of Senegal will play the Squirrels of Benin for a spot in the semi-final with Nigeria playing South Africa.

On thursday July 11, The elephants of Cote d’Ivoire will lock horns with the desert foxes of Algeria, while Madagascar play host to Tunisia.

A total of 20 goals were scored in the round of 16 knock out stage with three games going into penalties.

After Uganda, and Egypt, Tanzania sacks Nigerian head coach Emmanuel Amunike following their elimination in the group stage at the 2019 Africa Cup of Nations
The Nigerian coach was notified of the decision on Monday.

The Kilimanjaro Stars were bombed out of the first stage of the tournament in Egypt .

Now there is no margin of error as the 2019 AFCON has reached the crucial stage, four countries will bid the tournament good bye while four others will vie for medals.

A day off for the teams as no games have been scheduled for today but action returns tomorrow and we will be here same place same time for another insider at the Afcon, bye for now.