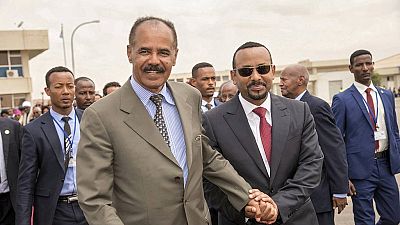 On the first anniversary of the historic Ethiopia – Eritrea peace deal, the two neighbours are working to actualize the pillars of the deal signed in Asmara last year.

“The two countries continue to work earnestly for full implementation of the five-pillars of the agreement & for greater regional cooperation ushered in its sequel.”

The post was accompanied by a photo of Ethiopian Prime Minister Abiy Ahmed and Eritrean president Isaias Afwerki signing the peace deal when Abiy flew to Asmara on July 8.

The deal paved the way for Afwerki to also visit Ethiopia days later. The two leaders have since then met a number of times whiles government interaction at different levels continue to be boosted.

Some other key planks of the deal include the reopening of embassies on both sides, the resumption of flights betwen the two capital – Asmara and Addis Ababa, the restoration of phone connection and the reopening of borders.

As at today, reports indicate that all border crossings between the two have been unilaterally closed from the Eritrean side. The official handing over of the town of Badme to Eritrea remains one of the main symbolic points remaining.

Experts have however expressed concerns about the process of implementation of a deal that has been tagged as not only important for the two parties but for other countries in the Horn of Africa region.

July 8, 2018 Historical Images
Ethiopia's PM Abiy Ahmed arrived in Asmara Eritrea for landmark visit.
The historic visit was the first of its kind in 20 years that opened a new chapter of peace and cooperation between #Eritrea and #Ethiopa pic.twitter.com/uWRYalkMTO