Jealousy the cause of US-China trade 'war' - Ramaphosa 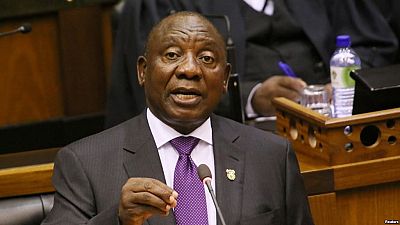 South African President Cyril Ramaphosa said on Friday that South Africa cannot allow its economy to be held back by the U.S.-China trade war, which he said was born out of jealousy.

Speaking at the Digital Economy Summit, Ramaphosa said local telecommunications companies, which he did not name, had written to him before he attended last weekend’s G20 summit, urging him to intervene.

“We cannot afford to have our own economy being held back as there is this fight that the U.S is fighting born out of their own jealousy,” said Ramaphosa.

We cannot afford to have our own economy being held back as there is this fight that the U.S is fighting born out of their own jealousy.

He said the telecommunication firms had written to him concerned about the impact the trade war would have in relation to the Chinese telecoms equipment maker Huawei Technologies.

“They said, Mr President, this tussle that is happening between China and the United States around a company called Huawei is going to hurt us because we want to go to 5G and only this company Huawei can lead us to 5G but the United States is now punishing them,’” he said at the Digital Economy summit.

Huawei has been a component of the trade war that has hung over financial markets, with President Donald Trump recently agreeing to loosen restrictions on Huawei after meeting with Chinese President Xi Jinping at the G20 summit.

In May, the company was added to the so-called Entity List, which bans American firms from selling to it without special permission, as punishment for alleged actions against U.S. national security interests.