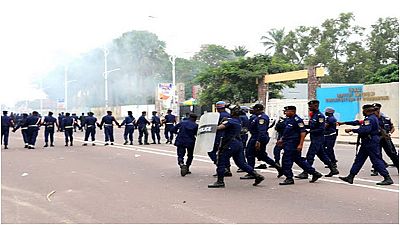 Demonstrators clashed with the police in Goma on Sunday. The police were place strategically after the opposition called for the demonstrations in spite a ban by the authorities of the Democratic Republic of Congo.

Police fired tear gas to disperse small groups of 10 to 15 young people who wanted to march on the appeal of the Lamuka opposition coalition in Goma, an AFP correspondent said. There were also stones on the road.

Calm prevailed in the middle of the morning in Kinshasa, where three Lamuka officials had announced their intention to defy the ban imposed on Friday by the governor: the former war chief and former vice president Jean-Pierre Bemba, the former presidential candidate Martin Fayulu and former Prime Minister Adolphe Muzito.

The police were place strategically after the opposition called for the demonstrations in spite a ban by authorities.

“Any gathering of more than 10 people will be dispersed this Sunday, June 30, 2019,” warned Saturday the police chief of Kinshasa, Sylvano Kasongo.

President’s take on the protests

The new President of the Republic, Felix Tshisekedi, declared himself “in agreement” with the ban on the march of his former allies of the opposition.

“Since I’ve been there, I have not banned any demonstrations, the rights and freedoms of the citizens are guaranteed, but we have the impression that there are some who confuse democracy and anarchy”, was justified the President in his first major interview at Radio France Internationale (RFI) and France 24 since his inauguration on January 24th.

The opposition protests against the invalidation of the election of about twenty of its deputies pronounced at the beginning of June by the Constitutional Court.

“There have been some unacceptable things,” acknowledged President Tshisekedi. “When I received the President of the Constitutional Court, it was to know more about these judgments which were for some scandalous”.

The president assured that “there is within the Constitutional Court a procedure for the repair of material errors as they say”.