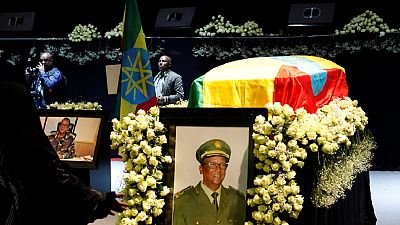 The soldier who shot and killed Ethiopia’s army chief on June 22 in the capital Addis Ababa has been identified by authorities as one corporal Mesafint Tigabu.

Mesafint has been the subject of a back and forth in communication since the event that led to the death of Seare Mekonnen and another retired general Gezai Abera.

The independently-run Addis Standard reported that the disclosure was contained in a statement issued on Thursday night (June 27) by a “Security and Justice Taskforce.”

The statement said the corporal who was shot and injured is currently under arrest with media reports suggesting that he was currently in intensive care unit after he sustained injuries after the incident.

An initial government statement said the slain army chief had been assassinated by a bodyguard who was in custody.

But police boss Endeshaw Tasew was also quoted as saying later that the said bodyguard had committed suicide after the incident, an apology was subsequently issued with the clarification that the said officer was in hospital.

Five officials in all were killed by the twin attacks of June 22 in Amhara regional capital’s Bahir Dar and the capital Addis Ababa. Later reports said dozens had died in Bahir Dar.

The three top officials who were killed were president of the regional government, the attorney general and a top advisor. They have since been buried and mass arrests made in Bahir Dar.

The two generals who according to government were working to thwart a takeover of political authority in Amhara region were also killed. Government said the two cases are related.

The bodies of the generals was sent to the northern Tigray region where a burial was held. Government held an event in Addis Ababa to honour them with PM Abiy and president Zewde openly shedding tears.

Internet access – only WiFi – was restored five days after it was cut post the foiled coup. People report that SMS and mobile data remain inaccessible as at Friday morning.