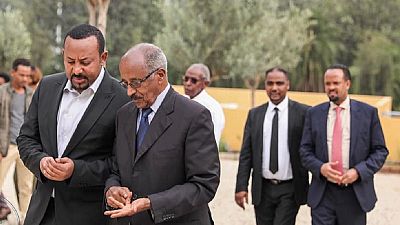 The Ethio-Eritrea peace deal is inching towards its first-year anniversary and both countries are likely to mark the occasion with as much funfair as they did in July 2018.

On Wednesday, an Eritrean delegation flew into Addis Ababa for two main reasons. Transmit condolence message from President Afwerki on death of the Ethiopian PM’s father and to reflect on the successes of the peace deal.

“The Eritrean Government officials came to deliver a message of condolence from President Isaias Afwerki and to deliberate upon the one-year peace journey taken between the two countries.