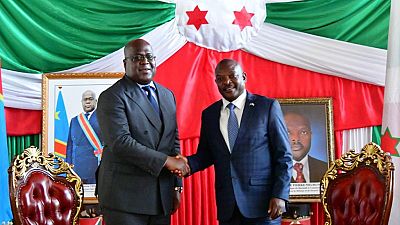 The President of the Democratic Republic of the Congo Félix Tshisekedi met with Burundi President Pierre Nkurunziza during his visit to the east African nation on Friday.

During the working visit the two leaders of the neighbouring nations agreed to have a peaceful co-existence. According to Burundi Presidency, the two committed to strengthening the bonds of friendship that unite their two countries.

“The two Presidents stressed the need to strengthen regional and sub-regional integration organizations in the promotion and consolidation of peace, security, stability and sustainable development,“said Ezechiel Nibigira, Burundi’s Minister of Foreign Affairs.

The two Presidents committed to strengthening the bonds of friendship that unite their two countries.

Tshisekedi and Nkurunziza agreed to subdue militias in their nations as well.

Tshisekedi had just come from the neighbouring nation of Tanzania where he had successful discussions with President John Magufuli.