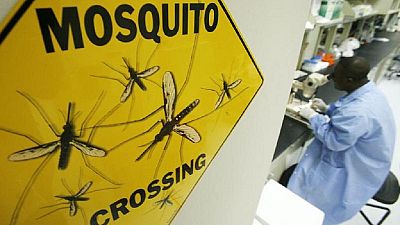 Burkinabe scientists in one of the country’s village plagued by malarial mosquitoes, are conducting an experiment to test whether a fungus genetically-engineered to produce a toxin found in spider venom can provide a breakthrough in the worldwide fight against malaria, a deadly mosquito-borne disease that killed an estimated 435,000 people in 2017, according to the World Health Organization.

“If we can find a solution against this disease which killed my child, other people we will thank god. They should do everything to eradicate this disease,” said Dramane Ouedraogo, a dedicated father that has visited his son’s grave every day since the two-year-old died of malaria, n the village of Soumousso.

Brian Lovett, a Ph.D. candidate at the University of Maryland leading the project said the idea is to target the mosquitoes using the natural characteristics of the fungus and spider venom.

Burkinabe scientists in one of the country's village plagued by malarial mosquitoes, are conducting an experiment to test whether a toxin found in spider venom can provide a breakthrough in the worldwide fight against malaria.

The scientists have engineered the DNA of the Metarhizium pingshaense fungus to deliver a toxin produced by Australian Blue Mountains funnel-web spiders. The toxin kills the malaria-carrying Anopheles mosquito when the fungus comes in contact with insect blood.

“Out of the box, if they land anywhere on the outside of a mosquito, they’ll recognize that they’re on a mosquito and they’ll burrow their way into the mosquito,” Lovett,the lead author on the study said.

Raymond St. Leger, the University of Maryland professor who co-authored the study, said the idea came after the World Health Organization issued a call for a scientific solution to the rapid evolution of insecticide-resistant mosquitoes that had adapted to survive conventional insecticides.

After successful lab trials, the U.S.-based team headed to Burkina Faso, where scientists there produced and tested the toxin-infused fungus in a national research lab in Bobo Dioulasso and constructed a simulated village named “Mosquito-Sphere” in nearby Soumousso, complete with huts and muddy pools.

Insecticide-resistant mosquitoes multiplied in a large enclosed breeding site and calves were used as bait to lure the mosquitoes into experimental houses where a black cloth saturated with the fungus was hung from the wall.

“The mosquitoes fly around the room, looking for bait to feed, so they feed on the (calf). After feeding, mosquitoes look for a place to rest, they usually go on the wall. Given they are attracted to black, they will rest on the treated cloth which is black. That is when they make contact with the fungus spores and the fungus starts to germinate inside them and that is what kills them,” Abdoulaye Diabate, head of the research team at the Institut de Recherche en Science de la Santé in Burkina Faso, explained.

Baladji Ouattara, village chief of Soumousso, said the research has given hope to a community where malaria has been a fact of life.

“Malaria is the disease that affects villagers the most. We know that the mosquitoes that cause it will never be completely killed. But if this project being developed here is a good solution, I would ask the agents to extend their project to all the houses in the village.”

By employing the fungus in tandem with conventional insecticides, the scientists believe they can prevent mosquitoes from developing resistance and the same technology could one day be used to combat other mosquito-borne illnesses, such as Zika and Dengue.