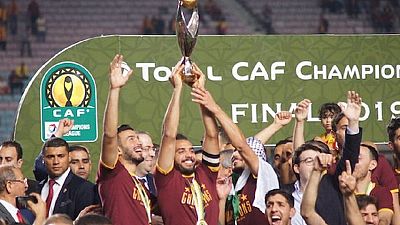 Esperance Tunis won the African Champions League against Wydad Casablanca on Friday evening in Rades, winning 1-0 in the return final, after a standoff over the Video Assistant Referee (VAR).

After Mohamed Youcef Belaïli’s opening goal, Wydad’s Walid El Karti’s 60th minute equaliser was ruled out by the referee for offside. The Moroccans requested verification by the VAR but Gambian referee Bakari Gassama declined. Furious, they watched off the pitch.

A few skirmishes broke out and water bottles were thrown on the lawn, leading to the intervention of the police. The atmosphere then calmed down, giving way to endless discussions on the pitch between CAF officials, staff members and both teams.

CAF President Ahmad Ahmad tried to convince Wydad players to return to the pitch in vain.

After an hour and a half, the referee came back to the centre of the field and blew the whistle for the final end of the match sending the Stade Olympique de Rades into wild celebrations.

In what have been described as shameful scenes for the tournament’s organisers, reports later suggested VAR was not used due to technical issues with the system.

BeIN Sport reported that the match was stopped because the VAR system was not working due to “technical problems”.

In the end, Esperance won 2-1 on aggregate to claim their fourth continental championship in club history.