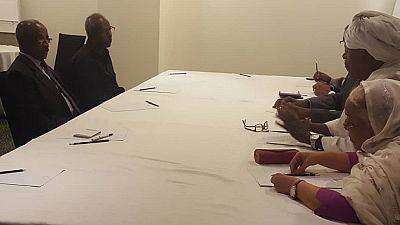 An Eritrean delegation that was dispatched by President Isaias Afwerki to neighbouring Sudan met with leaders of the protest movement that toppled Omar al-Bashir in April.

The two-man delegation comprising Foreign Minister Osman Saleh and presidential advisor Yemane Ghebreab met with representatives of the Forces for the Declaration of Freedom and Change, FDFC, in Khartoum.

They had earlier met with leader and deputy of the Transitional Military Council, TMC, that toppled Bashir after incessant protests that started in December 2018.

The FDFC representatives stressed the brotherly ties between the two countries whiles the delegation also expressed their best wishes for an outcome that served the best interests of Sudan.

The delegation, on its part, conveyed #Eritrea‘s wishes for an outcome that serves the interests of peace, stability and development in Sudan. pic.twitter.com/0ix3T0eqo9

Meanwhile, protest leaders have called for a nationwide boycott in the wake of the latest stall in talks aimed at a civilian transition. Whiles the two groups have largely agreed on a legislative set up, the sovereign council’s composition is the cause of a rift that seems irreconcilable.

The continued presence of sit-ins and barricades in parts of the capital Khartoum had been a major sticking point between the parties. Another being the request by the military that Islamic Sharia law be made the main source of legislation.

Bashir is currently being held in a maximum security prison on charges of money laundering and terrorism financing. More recently prosecutors revealed that he will be charged for killing of protesters.