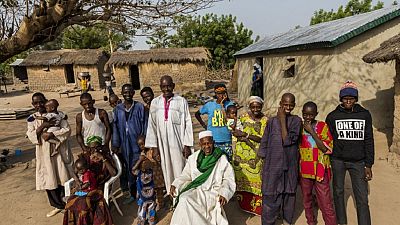 Aminata Sidibé started a family in Cote d’Ivoire in 1960, the same year the country became independent. Three other generations of her family have followed, but they are still not recognized as Ivorian. Like thousands of other fula people, they are penned in by legal barriers that put them at risk of statelessness.

Aminata and her family are Fula, a traditionally nomadic community that roams through over 10 west and central African countries. Aminata – who estimates her age at 74 – has lived in Kong, northern Ivory Coast since her marriage.

Aminata Sidibe is a foreigner in her own land. She was married in 1960, the same year that Cote d’Ivoire became independent. 59 years later, Aminata and her family are still trying to belong.

Aminata Sidibe is a foreigner in her own land. She was married in 1960, the same year that Cote d'Ivoire became independent. 59 years later, Aminata and her family are still trying to belong.

But the Ivorian authorities consider the matriarch and her family of 45 members as being from Burkina Faso. It’s not enough that her children and extended family were born in Ivory Coast. Burkina Faso will not take them after so much time away.

Across the world, millions of people are without nationality. They face a lifetime of inequality and impediments to such basic rights as education, health care, employment and free movement.

Like many Fula, the Tall family raise cattle but cannot own land. Their grazing rights were usually private agreements with the original owners, which does not confer actual legal land ownership. They also cannot apply for formal jobs, open bank accounts or get a driving license.

Four generations of Amanita’s family are stateless. Though born in Cote d’Ivoire , they have no claim to citizenship. Citizenship is conferred only to those whose parents have Ivorian nationality.

Over decades, migration and civil strife have uprooted people across West Africa.

UNHCR is working with Ivorian authorities to eliminate statelessness, but thousands remain in legal limbo.

The process of naturalization in Cote d’Ivoire is complex, even for those with a birth certificate.

Many Fula don’t have a formal education and cannot read making the legal process even harder.

Some of the youngest in the Tall family go to primary school, and dream of careers in the legal sector, but, they will need university degrees to reach their goals.

“We want our children to get their papers so they can go further in their studies. It is very important to us,” Seydou added.

After living as outsiders for four generations, the Talls are now placing their hopes in the generation coming up now.