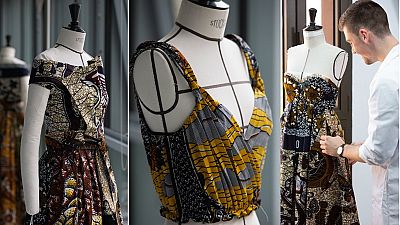 Famed French design house Dior were up for trolls when they posted a tweet in early May outlining what was their latest fabrics on social media platform Twitter.

The said fabrics were the mixed coloured type with designs that most Twitter users identified as more African with people over the continent having spotted it long before Dior’s ‘unveiling.’

The design house wrote about the 100% WAX fabrics which it said belonged to their #DiorCruise 2020 collection: “A fabric that embodies a meeting of cultures, Wax provides the through line for the Cruise collection presented in Marrakesh.

To highlight it, Maria Grazia Chiuri collaborated with the Uniwax studio in Ivory Coast, which reinterpreted Dior codes such as toile de Jouy and tarot cards.

For her #DiorCruise 2020 collection #MariaGraziaChiuri collaborated with the Uniwax factory in Ivory Coast on special edition fabrics based on 100% African Wax, revisiting Dior codes like ‘toile de Jouy’ and ‘tarot cards.’ Watch the video https://t.co/MIkT7rhxX8. pic.twitter.com/d06zZdz54G

“To highlight it, Maria Grazia Chiuri collaborated with the Uniwax studio in Ivory Coast, which reinterpreted Dior codes such as toile de Jouy and tarot cards.

“This ”Christian Dior – Uniwax” special edition is used for long and short bustier dresses, skirts, jumpsuits, jackets and trousers that appear like so many standard-bearers of freedom,” they added.

For most Africans who commented on the Dior tweet, the company had virtually usurped long used African prints and were making it seem as though it were theirs.

The comments ranged from the seemingly serious, through to the instances of mockery and even efforts to “correct” Dior’s claims.

Dior named after Christian Dior is a French couturier whose first collection in 1947 created a style that became known as the New Look (1905-1957).

Fact is, those that failed to read the company’s brief missed out on the fact that Dior linked the fabrics to West Africa, specifically Ivory Coast. A case of haste to comment on a social media space where defence overrides seeking clarity? Below are some tweets.

Wow. We have been rocking these at weddings, celebrations etc for forever. We even have our own designers for them. This is not new in Africa.

So our mother's been wearing Dior all these decades? pic.twitter.com/MIggs44DQK

Congratulations on being some of the last people in the world to “discover” wax-print. Would you like to learn the history of it, spread all across Asia and Africa? Or is ignorance on-trend this summer?

We have been wearing it. pic.twitter.com/PDkjaMnwSX