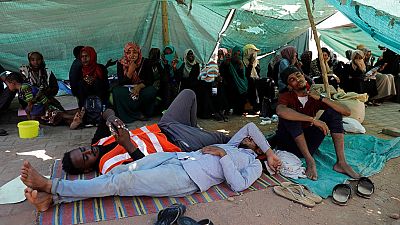 Nyachoat is two years old. Just two hours ago, he was having a seizure due to malaria.

His parents arrived just in time at this clinic in Udier, a landlocked village in northeastern South Sudan.

The little boy has been sick for several days.

Most of the children who die here die mainly from three common diseases: malaria, acute watery diarrhoea and a respiratory tract infection that progresses to long-term pneumonia.

“When I came to the clinic this morning, there was no one here. I went home. When I got home, he was unconscious. He was shivering and convulsing at the same time.”

Nyachoat could be saved. But others have not been so lucky.

Horrible accounts of war, rape and displacement have become commonplace in Southern Sudan, but for many, the greatest danger is often the danger of diseases that are not easy to treat.

According to the International Committee of the Red Cross, which runs the clinic, 70% of deaths are due to diseases that could easily be prevented. This region of Upper Nile is one of the most affected.

Irene Onyenya, is a nurse and health official for ICRC

“Most of the children who die here die mainly from three common diseases: malaria, acute watery diarrhoea and a respiratory tract infection that progresses to long-term pneumonia.”

The Upper Nile region, bordering Sudan and Ethiopia, was ravaged by war in 2017. The infant and maternal mortality rate in Southern Sudan is one of the highest in the world.

Overburdened with household chores, women are not always able to get their children to the clinic on time.

“It started with a stomach pain. All my children sleep together under the same mosquito net. Therefore, if one of them gets sick, they all get sick.” says Buk Gader.

The clinic cannot treat more complicated cases such as operations or blood transfusions.

The nearest hospital is in Maban, three days’ walk or five hours’ drive away.

But in Udier, there is only one car in the entire village.