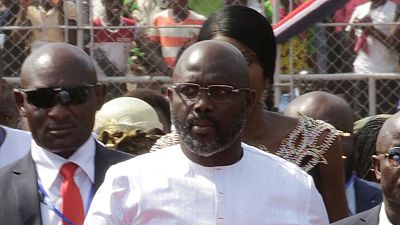 President of Liberia, George Weah, is working from his official residence after two black snakes were found in the building where his offices are located in the capital Monrovia.

The Associated Press reported quoted deputy press secretary Smith Toby as saying the president was acting on advice to stay away from the building till it had been fumigated.

The deputy press secretary says the fumigation has begun to take care of “crawling and creeping things.” The president is, however, expected back in the office on Monday, Toby added.

The said snakes were seen this week briefly emerging from a hole in a wall of the building’s reception area. Liberia is home to poisonous snakes and officials are not taking chances.

Weah was sworn in as Liberian president in January 2018 having won a vote run-off against former vice president Joseph Boakai. It was his second attempt at the seat having first lost to Ellen Johnson Sirleaf in 2006.

He became the 25th president of Liberia which is described as Africa’s oldest republic. Since coming into office he has doubled down on the fight against corruption and announced free tertiary education.

His critics accuse him of targeting journalists and seeking to muzzle the press. A missing cash scandal also rocked the administration with a number of former government officials standing trial on corruption charges.