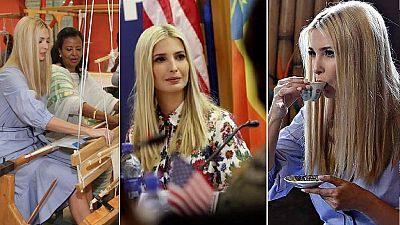 She arrived in the country on Sunday hailing Addis Ababa as the “diplomatic capital of Africa and the continent’s highest city.” The period of her stay has been packed since arrival through to departure.

In between the period, she savored the acclaimed Ethiopian coffee, signed deals aimed at women empowerment – the reason she embarked on the trip, paid tribute to victims of Boeing 737 MAX accident and met Lucy.

She also did high-level diplomacy meeting with the President Sahle-Work Zewde, with Prime Minister Abiy Ahmed and holding talks with the deputy chairperson of the African Union Commission.

Thank you for an incredible trip Ethiopia! ???? pic.twitter.com/lqE2XLQ25I

Soon on arrival and holding talks with the U.S. ambassador and other embassy officials, Ivanka set out to work, meeting Ethiopian Women in Coffee Association, EWIC.

Describing them as inspiring female entrepreneurs she noted that with U.S. development agency, USAID, support, they were overcoming a lack of access to capital and growing their businesses.

Next stop, to the premises of Muya Ethiopia, an outfit that engages in the production of traditional fabrics. The OPIC, a US government outfit that helps businesses enter emerging markets, signed a deal with Muya. She capped the day’s work as “incredible.”

Before meeting Abiy, Ivanka had held talks with President Sahle-Work Zewde. State run FBC said Ivanka spoke about the White House Women Empowerment drive she was leading whiles the president also highlighted Ethiopia’s efforts at empowering women across the board.

Then she met with the AUC deputy chair and other commissioners for deliberations aimed at economic empowerment of women across Africa.

During the meeting at UNECA, Ivanka announced the launch of 2X Africa, under which OPIC was to directly invest $350 million to mobilize $1 billion aimed at women empowerment efforts in Sub-Saharan Africa.

According to the U.S. embassy in Addis Ababa: “Ms. Trump announced a $260K loan through Enat Bank to help Azalech Tesfaye of Azalech Coffee expand her business – made possible by a U.S./Swedish loan guarantee program that increases Ethiopian women entrepreneurs’ access to finance.”

The Embassy added that: “Ms. Trump announced a new W-GDP award to expand the Muya business with the signing of a letter of interest for financing between Muya and OPIC.” They however did not indicate how much the deal will be worth.

Today, I joined DBohigian to announce the launch of 2X Africa!

“In the morning of April 15, Ivanka along with USAID Administrator Mark Green and Acting OPIC President and CEO Dave Bohigian paid respects to the victims of Ethiopian Airlines 302 crash at the Holy Trinity Church in Addis Ababa.

“She met with religious leaders representing the diverse faiths of those who perished in the crash, laid a wreath, and observed a moment of silence,” the embassy said in a statement.

The final bit was meeting with Lucy. She is a 3.2 million-year-old member of Australopithecus afarensis and the most complete skeleton of an early human ancestor ever discovered.

State media outlet FBC showed Ivanka taking a careful look at the remains of Lucy which are stored in the National Palace in Addis Ababa.

Four years ago, then U.S. president Barack Obama also ‘interfaced’ with Lucy during his historic visit to Ethiopia. Her remains were found in Ethiopia in 1974. 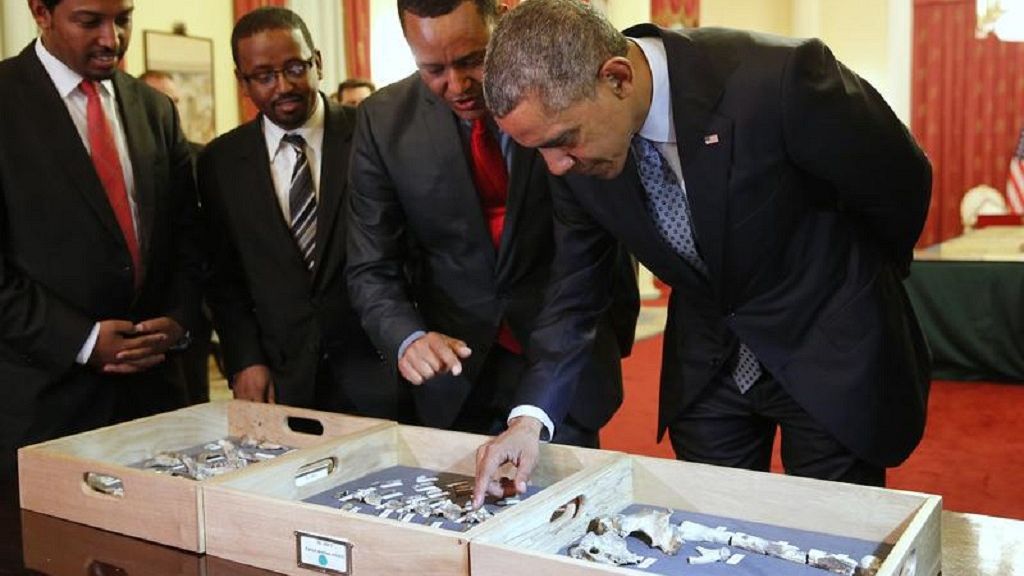 Today, USAIDMarkGreen, DBohigian, and I visited Holy Trinity Church in Addis Ababa to pay our respects and honor the memory of the lives lost in the tragic Ethiopian Airlines crash. My heartfelt sympathies to all the victims’ families and loved ones. pic.twitter.com/dbz6kjlza2

As IvankaTrump wraps up visit to #Ethiopia, she had the chance to meet humankind’s original empowered woman-Lucy. #Lucy is a reminder of our shared history and that we would have no past and can have no future without ensuring women are included in our society. pic.twitter.com/RguerLfzpO