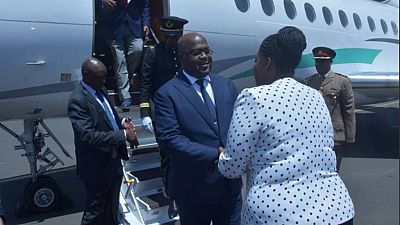 Democratic Republic of Congo’s new President Felix Tshisekedi is scheduled to visit the United States of America, in what will be his first diplomatic visit outside the continent, from April 3 to 5.

The spokesperson of the State Department Robert Palladino on Tuesday said Tshisekedi will hold meetings with U.S. Secretary of State Mike Pompeo and other senior cabinet officials in the Trump administration.

“We share President Tshisekedi’s interest in developing a strong partnership between the United States and the Democratic Republic of Congo,” Palladino told a briefing.

It was not immediately clear whether he will meet with President Donald Trump.

US interests in DRC

Palladino said efforts to contain the Ebola outbreak in the violence-plagued eastern region of Congo would also be discussed.

The country’s Ebola epidemic has now exceeded 1,000 cases, according to the country’s health ministry, with a death toll of about 629 in the world’s second-worst ever outbreak.

Washington has imposed sanctions against senior officials for fraud and corruption in Congo’s Dec. 30 presidential election, won by Tshisekedi, which led to Congo’s first ever transfer of power via the ballot box.

While the sanctions have targeted the country’s electoral commission chief and advisors, Washington has stopped short of calling into question the legitimacy of Tshisekedi’s victory.

ALSO READ: Here’s why DRC is important as US names new envoy to Great Lakes

At the recently concluded Africa CEO Forum which Tshisekedi attended in Rwanda, the DRC head of state called on the leaders in the region to champion integration and ‘build bridges, not walls’.

‘‘Our countries will be neighbors forever. We are just temporary leaders so we shouldn’t focus on irrelevant issues,’‘ the president said.

Tshisekedi, who was in Rwanda at the invitation of his counterpart, president Paul Kagame, has also visited at least 5 other African nations since taking office in January this year.

On his way to Rwanda, Tshisekedi made a stopover in Uganda, where he was hosted by president Yoweri Museveni to discuss ‘ trade, regional security and other areas of bilateral interest to Uganda and the DR Congo’.

Last evening, I hosted His Excellency Felix Tshisekedi at State House Entebbe. We discussed trade, regional security and other areas of bilateral interest to Uganda and the DR Congo. pic.twitter.com/Ahg09EZuuT

In his first diplomatic trip as president, Tshisekedi visited Angola, Kenya and the Republic of Congo, where he received commitments of support as he seeks to steer DRC away from the often chaotic years of his predecessor Joseph Kabila’s presidency.

The 55-year-old also visited Namibia in February, where he made an appeal for the support of the regional Southern African Development Community bloc.

Both the African Union and SADC questioned the credibility of the election that brought Tshisekedi to power, while Kabila’s government expelled the EU ambassador to Kinshasa before the election.

Below is a list of the heads of state Tshisekedi has met since taking office, through state visits and at international meetings held across the continent.