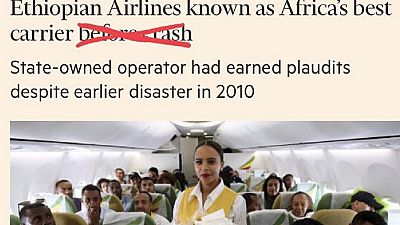 Soon on Sunday (March 7) after the crash Ethiopia Airlines crash in Bishoftu, the Associated Press, AP, came in for flak for seemingly prioritizing non-Africans in a tweet announcing that there were no survivors from the crash.

Many social media users called them out for being insensitive especially when Kenya for example suffered the highest casualty with 32 deaths. Most Twitter users slammed the AP for the tweet – it did not respond to any of the critical messages.

It wasn’t before long that Wall Street Journal was under fire for a print edition that said a plane had crashed in Africa.

Again people expressed disbelief at the notion that a news outfit as that will lump together over fifty countries into an incident. The headline ‘Jet Crash in Africa Kills 157,’ did not sit down well with many.

The Financial Times also intimated in an article that Ethiopian was known as Africa’s best carrier before the crash. Tweeps lashed out stressing that Ethiopia’s position as the continent’s best carrier remained intact despite the unfortunate incident of March 10.

It is not the first and most likely won’t be the last time that western media portals have attracted the ire of people over their choice of words and style of journalism in sensitive areas.

The most recent incident was when the New York Times in covering the Dusit2 terrorist attacks published gory photos of slain people. Kenya’s protested and called for the deportation of NYT’s reporter but the paper stood by its decision citing its house style and beliefs.

Fixed it for you. pic.twitter.com/wK5p2vQOv0