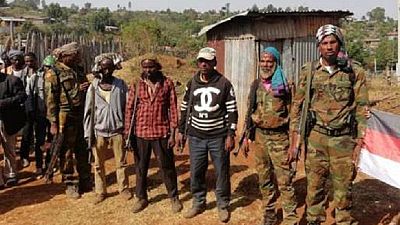 “We are treated inhumanly and no one cares about us, most of our comrades are now ill due to lack of hygiene and absence of food,” one of the ex-rebels told the BBC Afaan Oromoo Service.

An estimated 1,000 fighters under the banner of the Oromo Liberation Front, OLF, are currently kept at the Tolay camp located in south-western Ethiopia.

It is not known how long the hunger strike is supposed to last or the conditions under which they will call it off.

In the last few months, government forces and OLF fighters in a part of Oromia clashed with reports that the army had carried out air raids on their camps.

The Oromia regional government has had cause to talk in harsh terms about OLF’s operations after it was revealed that some of its fighters were involved in rising insecurity in the region – Ethiopia’s largest and most populous.

OLF is one of the main ex-terrorist groups that returned to the country last year from Eritrea. Their return was based on a peace deal reached between Ethiopia and Eritrea in July.

The Abiy Ahmed federal government agreed a deal with the group. The Oromia region has subsequently entered a political alliance with OLF but the security concerns have continued to linger.