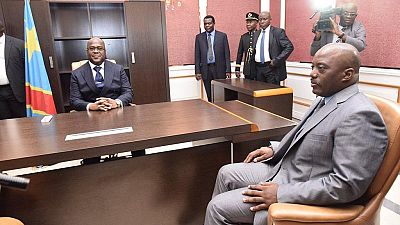 The party of Congo’s former president Joseph Kabila will choose the prime minister and negotiate over cabinet appointments under a power-sharing deal with his successor Felix Tshisekedi, sources in both their parties said on Friday.

The two parties announced loose plans to form a coalition government on Wednesday, nearly two months after Tshisekedi took office in Democratic Republic of Congo’s first transfer power at the ballot box since independence in 1960.

The announcement suggests that Kabila is likely to remain a highly influential figure in Congolese politics, despite giving up the presidency after 18 years in power.

Clearly, considering the striking majority we obtained, the prime minister will be designated by the FCC

It will also further fuel the suspicions of those who allege the pair struck a deal to rig the Dec. 30 election in Tshisekedi’s favour.

Opposition candidate Martin Fayulu rejected the results as a sham, an assertion supported by Congo’s Catholic Church, which deployed 40,000 observers to the polls. African and Western nations initially expressed doubts about the outcome before accepting it.

“Clearly, considering the striking majority we obtained, the prime minister will be designated by the FCC,” Julien Lubunga, a Kabila advisor, told Reuters by phone on Friday. “The ministries’ negotiations are ongoing, and I expect a government by the end of March.”

Congo’s constitution dictates that the prime minister must come from the majority in parliament, but normally the president makes the final decision on who will fill the post.

Tshisekedi’s Common Front for Congo only obtained around 50 seats, making it impossible for the coalition to govern without the support of Kabila’s FCC. Through its control of parliament, the FCC can also maintain significant influence over the country’s finances and security apparatus.

The two leaders have met at least twice in recent weeks to discuss the power-sharing agreement, once at Kabila’s farm and once at Tshiskedi’s temporary residence in the capital, Kinshasa. Their parties issued a statement Wednesday saying that, to reflect the will of the Congolese people, they intend to “govern together as part of a coalition.”

Kabila wants to retain control over key ministries such as defence, foreign affairs and finance, a concession Tshisekedi’s coalition is not ready to make, according to officials in both camps involved in the negotiations.

“They will pick the prime minister,” said a source close to Tshisekedi. “And in return we have requested and are confident of obtaining the justice, defence, foreign affairs, budget and finance ministries.”