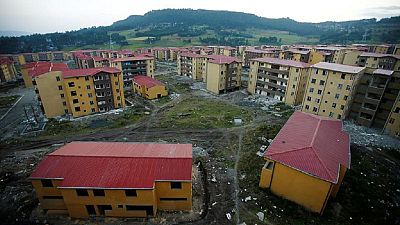 Hundreds in some cases thousands of people in Ethiopia’s Oromia region took to the streets today (March 7) in major towns to protest the manner in which the Addis Ababa city administration alloted condominium buildings.

Reports indicate that over a dozen locations across Oromia – the largest and most populous region – were hit by the protests. Among other places Jimma, Ambo, Awaday, Bale and Adama were all affected by the action.

Addis Ababa which serves as the national capital is located in the Oromia region but is one of two chartered cities in the country. The other one is Dire Dawa. Oromos have long claimed the capital which is referred to in local parlance as Finfeene.

The deputy mayor said farmers who were displaced from the sites were included in the transfer without lottery. The issue of uprooting local farmers to make way for the housing project has long been a divisive issue.

The project which dates back to 2016 forms part of plans to deal with rapid population growth and an acute shortage of affordable housing.

A authorities in Addis Ababa and in smaller cities across the country have been building condominium units targeting low and middle-income groups, financed entirely with public money.

Although Ethiopia is one of the least urbanized countries in the world, Addis Ababa’s population ast at 2016 was thought to be close to four million, and growing at a rate of nearly four percent per year.

#Ethiopia_Protest- Thousands of protestors have taken to the streets across nearly ten cities in Ethiopia’s Oromia region. This comes a day after the Addis Ababa administration handed over thousands of condominiums (Housing blocks) to buyers.

The housing complexes are typically four storeys high, with the aim of promoting densification and containing the city’s urban sprawl.

Poor residents who do not own property and are instead reliant on insecure tenancies, were encouraged to register for a lottery system which allocates the units as they become available.

Those who can afford the deposit and the scheme’s generous mortgage repayment terms are then granted ownership of their units, although all land in Ethiopia is still formally owned by the government.

The aim is to transform a housing sector historically characterized by rental occupation into one based on private home ownership.

Under the previous communist regime, known as the Derg, approximately 60 percent of housing in Addis Ababa was rental accommodation and government-owned housing in the Kebele municipal divisions accounted for 93 percent of the sector.

Kebele housing today is of typically poor quality, with homes made of wood and mud and without proper sanitation and infrastructure.

According to a report produced for the World Bank in 2016, the Integrated Housing Development Programme, IHDP, marks a “radical departure” from previous approaches to housing in Ethiopia.

The government aims to regenerate the inner city by replacing Kebele slums with condominiums.