The appointment of a Prime Minister in the Democratic Republic of Congo may still take time.

President Felix Tsisekedi at a state visit in Windhoek, Namibia on Tuesday said that no political party or coalition won majority of seats when CENI announced the results, in accordance with Article 78 of the Constitution.

A political coalition, affiliated to former President Joseph Kabila, who won majority of seats in the December polls has denied this.

This is why the latter had to sign a coalition agreement and he acknowledged it in Windhoek, recently he signed a coalition governing agreement with the Common Front for Congo.

‘‘At the end of the elections of 30 December 2018, there was a clear parliamentary majority unfortunately acquired by a political fraternity other than that of the elected President of the Republic. This is why the latter had to sign a coalition agreement and he acknowledged it in Windhoek, recently he signed a coalition governing agreement with the Common Front for Congo, which infact has the parliamentary majority’‘, said Constant Mutamba, a member of the Common Front for Congo.

Per the Congolese constitution, a Prime Minister must be chosen from the party with majority seats in the National Assembly. For president of the New Generation for Emergence of Congo, it will be necessary to appoint a caretaker Prime Minister for now.

“It means a Prime Minister under section 78 of the Constitution. To do otherwise would simply be contrary to the Constitution is an offence, of high treason as prescribed by articles 164 et seq. of the Constitution of the Republic and at the moment there is fear that the country will be plunged into an indescribable crisis’‘, he added

Mutamba also recalled that under the constitution of the third Republic of the DRC, the Prime Minister shares leadership of the executive branch of government with the President. 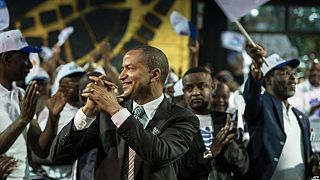