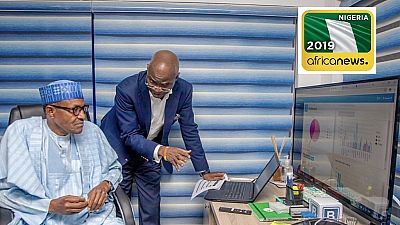 Nigerian president Muhammadu Buhari has congratulated himself and a team of young volunteers who worked at a campaign center dedicated to his re-election bid.

Buhari in the company of a number of ministers visited the Buhari Media Center in Abuja where he want to check on progress in tracking early results being announced by the election body, INEC.

“I congratulate you most sincerely, thank you very much indeed,” he said to applause.

As at Monday evening, INEC had released official results in ten diverse states were released Buhari had won eight as against Atiku’s two. In real figures, Buhari has 2,831,764 votes with Atiku having garnered 2,076,490 votes.

Buhari returned to the capital Abuja on Monday after casting his ballot in hometown of Daura in the northwestern Katsina State.

Asked whether he will concede defeat if he lost the polls afetr casting his ballot, the 76-year-old responded: “I will congratulate myself, I am going to be the winner.” His posture was interpreted in part as being arrogant whiles others said it was down to confidence.

He took time off to visit his farm on Sunday with the firm promise to make agriculture a continued priority of his administration.

Buhari came to power in 2015 beating then incumbent Goodluck Jonathan of the now main opposition Peoples Democratic Party, PDP. The All Peoples Congress, APC, Buhari leads became the first opposition party to win power since return to multi-party politics in 1999.