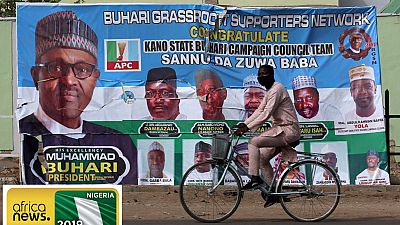 Nigeria’s electoral commission has reassured all interested parties that the rescheduled presidential and parliamentary elections will take place this weekend.

The delay was blamed on logistical issues in delivering ballot papers and election material, leading to a scramble to be ready in time for the new date.

Your votes will count.

Speaking to reporters in the capital Abuja on Thursday, INEC chairman Mahmood Yakubu said the commission was “fully on course” to push ahead with the vote this weekend.

Election materials had already been delivered to 19 of Nigeria’s 36 states and would be in all states except one by the end of the day, he said.

“I want to reassure you that elections will be held on Saturday,” he said.

“There won’t be another postponement.”

Just over 84 million people are registered to vote in Saturday’s election when President Muhammadu Buhari will seek a second term at the helm of Africa’s most populous nation.

Of that number, 11.2 million people had still not collected their permanent voter cards (PVCs), Yakubu said.

The biometric identity cards are scanned by hand-held devices at polling stations when voters come to cast their ballots, with the aim of preventing fraud.

Nigeria’s main political parties have been accused of trying to rig the vote by a variety of means, which includes buying up voters cards, and each has accused the other of conspiring with INEC.

The main opposition Peoples Democratic Party (PDP) has accused the ruling All Progressives Congress (APC) of seeking to use the identities of dead voters and foreigners and of manipulating the electoral roll.

INEC itself has denied there was any political interference, with Yakubu saying there was no sense that the vote had been the victim of “sabotage”.

As resumed campaigning drew to a close on Thursday night, APC’s Buhari and PDP’s Atiku Abubakar made their final appeals to the electorate before heading to their home towns to vote.

With fears of a low turn-out — and possible violence — Buhari said the postponement should not prevent people from exercising their civic right.

“I urge all Nigerian voters to brave the challenges and ensure they cast their votes,” said the 76-year-old, who is campaigning on an anti-corruption and security platform.

“Your votes will count,” he said.

Abubakar, 72, recalled that in 2015, the electorate — “armed only with” their voting cards — had voted the last president out of office for the first time in Nigeria’s history.

“This Saturday, we will have the opportunity to do so again,” said the former vice-president, who has positioned himself as a free-market, pro-business candidate.

Buhari’s office meanwhile said anti-corruption investigators had told him that huge amounts of foreign currency had flooded into Nigeria.

The money was “intended to influence the general elections beginning on Saturday”, his office said, indicating it amounted to “millions of United States dollars”.