Even if Rwanda didn't exist, Burundi's issues will persist – Kagame 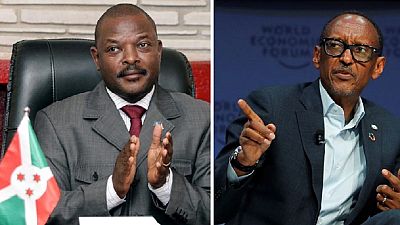 Rwandan president Paul Kagame has finally spoken about strained relations between his country and neighbouring Burundi. The relation is still the subject of mediation by Ugandan president Yoweri Museveni, Kagame confirmed.

According to him Burundi has hand and continues to grapple with internal issues that rolls on even if Rwanda was nonexistent.

Responding to the impasse during an interview with the East African newspaper, the new president of the regional East African Community, EAC, said there were differences between the two countries but that it went far beyond what the other party was made it look like.

For example, Burundi has publicly stated that Rwanda is its only problem. People make their own judgment. Let’s imagine that Rwanda does not exist. Would Burundi not be having problems?

“Actually, for Burundi, the situation is simpler and clearer. For example, Burundi has publicly stated that Rwanda is its only problem. People make their own judgment. Let’s imagine that Rwanda does not exist. Would Burundi not be having problems?

“There are people charged with responsibilities for Burundi: Mkapa as facilitator, and President Museveni as mediator, and other East Africans, who have not come up with much success.

“They would have said that they have found out that Burundi does not have any problems — that the problem comes from outside,” Kagame asserted.

In December 2018, President Pierre Nkuruziza called for a special regional summit on what he described as an ‘open conflict’ with Rwanda.

Burundi has been in a political crisis since Nkurunziza declared his intention to seek a third term.