Monarchs across Nigeria have spoken out over the continuous acts of terrorism in the country.

They are urging the international community, religious leaders and other royal monarchs to support the Nigerian Army’s fight against such barbaric acts.

“ As of now the Nigerian Army is neutral, because the army leadership under the present Chief of Army staff since his assumption of office has been nothing but pure professionalism so they are nonpolitical, they are non-tribal and they are non-sentimental. There, all they know is united Nigeria”, said Osun State, King Olowu of Owu.

The Nigerian people are interested in voting. Nigerians have shown a lot of resilience and a lot of interest.

There are fears that the wave of attacks and displacement of persons could impact on the West African nation’s impending polls.

Ezenwa Nwagu is a political analyst.

“There is nobody who can get into the mind of the insurgents but whatever it is, the resilience of the Nigerian people will over shadow that. The Nigerian people are interested in voting, it’s not the first time in 2015 we virtually even had to postpone elections on account of insurgency but as we speak, Nigerians have shown a lot of resilience, we have shown a lot of interest’‘, he said.

The electoral body, the Independent National Electoral Commission has assured that both armed and non-armed security personnel will be deployed to boost security. Many young Nigerians still remain uncertain of the security situation and elections, having lost faith in the governance system in Nigeria.

“Let your vote count, it is the most important thing that you have right now, let’s elect the right person that can control this country, control our military, dictate the right spot for Nigerians and make employment free”, said voter, Engineer Kenny Obafemi.

The state of security in Nigeria has for the past ten years been plagued by insurgents.

In recent year’s, the UNHCR said herdsmen are responsible for the deaths and displacement of over 320,000 persons in just four months.

With the 2019 elections just 24 hours away, acts of violence are still being recorded the northern regions of Nigeria. 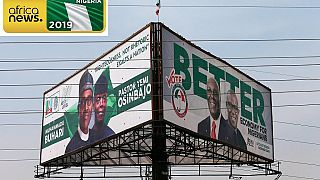 Displaced people in Nigeria's Maiduguri speak ahead of polls

Displaced people in Nigeria's Maiduguri speak ahead of polls