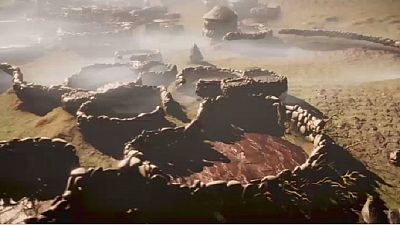 The researchers – who are with the University of Witwatersrand – have been studying the site in the Suikerbosrand National Park for decades.

But it was not until cutting-edge laser technology known as LiDAR (Light Detection and Ranging) became available in recent years that they were able to study the ruins in detail from above, and discovered that what they thought was only a scattering of ancient stone huts, turned out to be a veritable city.

LiDAR data is enabling us to do, actually to map and track what was happening in these towns, because there is no written record of them

“LiDAR data is enabling us to do, actually to map and track what was happening in these towns, because there is no written record of them. So we’re basically rediscovering and rediscovering the use, and what this means is filling a huge historical gap especially for Southern Africa, because you know pre-colonial history of Southern Africa has no written record, so now we starting to fill in the gaps using this LiDAR technology,” said Fern Imbali Sixwanha, a PhD candidate who is part of the team studying Kweneng.

Professor Karim Sadr has been exploring the area for 30 years but says the vegetation was too thick so he commissioned a LiDAR aerial survey to get a better look.

LiDAR essentially employs lasers to measure distances to the earth’s surface which is especially useful when surveying areas with thick ground cover.

“Scanning machine that sends out laser light and basically bombards the landscape, I mean billions and billions of pulses of laser lights something like four or five hundred per square meter, just all time coming out, and as soon as each pulse hits an object, any solid object, a bird or a leaf or a tree or the ground, it reflects straight back to the machine and then the machine can figure it out where that interception took place in three dimensions. So when the plane collects all of this data, masses of it, and it comes down to ground, download the data, then they can project that data,” said Karim Sadr, professor at the School of Geography, Archaeology, and Environmental Studies at the University of Witwatersrand.

Studies now reveal that Kweneng, which spanned about 20 square kilometres, was at its prime between the 15th and 19th century.

LiDAR has also enabled archaeologists to create digital images of the 800 homesteads and other structures that housed the city’s estimated population of 10,000 Tswana-speaking people.

“If you create a game and kids can play around with the context of knowing that is the heritage and having a sense of what was been there and the sort of the housing structure and architecture which was there,” said Witness Mudzamatira, one of the researchers.

“One of the most enlightening things is, as I’ve been able to understand what we were doing in our past you know, it gives us more broader idea of the people of southern Africa who they were and the types of activities that they did because you can now rediscover that activity line and just general interaction within the society,” added Sixwanha.

Kweneng – like other Tswana city-states – is believed to have gone into decline after civil conflict.