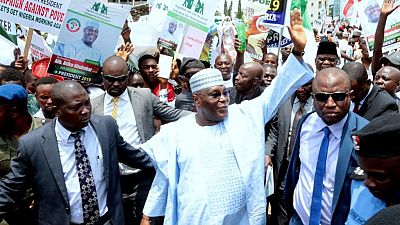 Nigeria’s main opposition party has halted its presidential election campaign for 72 hours weeks ahead of the vote in protest at the suspension of the country’s most senior judge by President Muhammadu Buhari, it said on Saturday.

“President Buhari has unleashed despotism on our nation.”

The president on Friday said he had suspended chief justice of Nigeria (CJN) Walter Onnoghen who has been asked to appear before a tribunal over allegations of breaching asset-declaration rules.

Onnoghen has not responded to the charges and his lawyers say the tribunal does not have the authority to try him.

Buhari, who was a military ruler in the 1980s and voted into office in 2015, is seeking a fresh term in an election scheduled to take place on Feb. 16. At stake is control of Africa’s top crude oil producer and one of the continent’s biggest economies.

We call on all well meaning Nigerians and members of the international community to rise in defence of democracy and save our nation from this imminent slide into tyranny. MBuhari OfficialAPCNg pic.twitter.com/jA0VcAiyjS

Nigeria’s judiciary has helped resolve electoral disputes after past votes, some of which have been marred by violence and vote rigging. The chief justice could preside over a disputed election result.

“In the first instance, we are suspending our campaign for 72 hours. It is our hope that President Buhari will listen to the voice of all lovers of democracy the world over and restore democracy in Nigeria immediately and without qualifications,” the People’s Democratic Party (PDP) said in a statement.

A spokesman for the Buhari’s ruling All Progressives Congress (APC) party and a presidency spokesman both did not immediately respond to phone calls and text messages seeking comment following the PDP’s campaign suspension.

Buhari on Friday said a court order from the Code of Conduct Tribunal, which is looking into the asset declaration allegations, directed him to suspend the judge.

The action of President MBuhari represents a constitutional breach and a direct attack on our democracy. This must never be allowed to stand, as there is no way by which democracy can survive under these autocratic tendencies.

The PDP, the main opposition party which was in power from the start of civilian rule in 1999 until Buhari’s 2015 election victory with his APC, said the judge’s suspension was a “brazen assault on the constitution”.

“We call on all well meaning Nigerians to rise in defense of democracy and save our nation from this imminent slide into tyranny,” it said in its statement.

The party’s candidate, businessman and former vice president Atiku Abubakar, is the main challenger to Buhari in the upcoming poll.

At the moment, President MBuhari has effectively suspended the constitution under whose basis the elections are being contested.