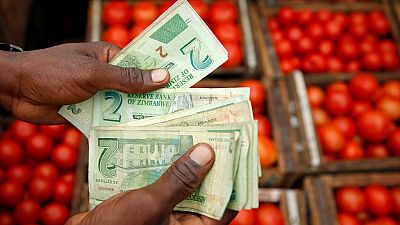 Zimbabwe’s security forces on Thursday attempted to distance themselves from a brutal crackdown on protesters, explaining that soldiers accused of beating residents in townships following protests over fuel price hikes were impostors who tarnished the name of the military.

Critics say the country is reverting to the authoritarian rule that characterised the 37-year regime of former leader Robert Mugabe, who was forced from power after a coup in November 2017.

President Emmerson Mnangagwa has promised action and asked Zimbabweans to be patient.

In this article, we explore the roots and fruits of the prevailing economic crisis that will likely not be easy to fix.

The crisis at a glance

There is a severe shortage of dollars, fuel and medicines, while inflation hit 42 percent in December, the highest in a decade. Foreign investors are, by and large, staying away.

Why did Zimbabweans protest?

Everyday life has been getting harder as the price of basic goods spirals. In the past two months, the country has suffered acute shortages of imported goods, including medicines, food and fuel.

Motorists can wait for hours to fill up at fuel stations, where soldiers are often deployed to break up fights over who is next in line.

On Jan. 12, Mnangagwa announced to reporters that the price of petrol had increased to $3.31 per litre from $1.32 from midnight, but there would be no increase for foreign embassies and tourists paying in cash U.S. dollars.

It was the final straw for some Zimbabweans, and violent protests broke out two days after his announcement.

Some residents say that while calm has returned, soldiers have continued to beat up civilians.

Many people blame Mnangagwa for failing to fulfil his pre-election promises to kick-start economic growth and make a clean break with the strong-arm rule of his predecessor.

How did Zimbabwe run out of cash?

The country abandoned the Zimbabwe dollar in 2009 after inflation reached 500 billion percent the year before. In its place, the government adopted the U.S. dollar and other currencies including sterling and the South African rand.

People hoped the move would spell the end of spiralling prices and rampant money printing that made much of their earnings and savings virtually worthless.

But over time, supply of the U.S. and South African currencies dried up, so in November 2016 authorities in Harare launched a surrogate currency – paper ‘bond notes’ designed to ease acute hard currency shortages.

The notes, which now have a total face value of $400 million, are backed by a $500 million loan from the African Export and Import Bank, the central bank has said. They are used like cash.

Officially pegged to the dollar at a rate of 1:1, on the street $1 fetches up to 3 bond notes, reflecting the ongoing shortage of U.S. dollars and people’s desire to trade out of cheapening bond notes and into more reliable currency.

A dwindling supply of bond notes and coins has led to banks limiting daily withdrawals to as little as $30 in bond notes. Companies are struggling to pay for imports and foreign investors cannot repatriate dividends or profits.

When the bond note was introduced, dollar deposits in the electronic banking system started losing their value.

Government borrowing via Treasury Bills meant authorities were creating money without the backing of sufficient currency reserves or gold.

It is these electronic dollars, theoretically worth $10 billion and nicknamed “zollars” by economists, that are raising fears that Zimbabwe might be heading for its second financial collapse in a decade.

Zimbabweans can do little but watch as the money in their bank accounts loses value compared with cash, prompting demands from businesses and civil servants for hard currency which can be deposited and used to make payments.

Zollars remain officially pegged at 1:1 to the U.S. dollar, but on the black market $1 is now worth $4 zollars. That has led some businesses to offer discounts on dollar payments.

The government has said it would only consider launching a new currency if it had at least six months of reserves. But Finance Minister Mthuli Ncube said Zimbabwe planned to introduce a new currency in the next 12 months.

Is Zimbabwe open for business?

Companies are struggling to import raw materials and equipment, forcing them to buy dollars on the black market.

Civil servants are paid in zollars like many other workers across the country. Only a small minority of employees working for foreign embassies, charities, or large international corporations are paid in U.S. dollars.

Last October, the central bank ordered banks to create separate U.S. dollar accounts for clients who are paid from overseas, which analysts said was a tacit admission by authorities that the greenback was not equal to the zollar.

The Confederation of Zimbabwe Industries has warned that some of its members could stop operating by the end of the month due to the dollar crunch. The group said its members had a backlog of $480 million in unpaid payments to foreign suppliers.

Cooking oil and soap maker Olivine Industries said on Saturday it had suspended production and put workers on indefinite leave because it owed foreign suppliers $11 million.

Zimbabwe’s largest brewing company Delta Beverages, part-owned by Anheuser-Busch Inbev, said it had abandoned a plan to only accept hard currency payments rather than zollars for its beer and soft drinks after the government intervened.

Mnangagwa, a former spy chief installed after Mugabe’s removal in a coup in November 2017, was elected in July amid hopes that he would help secure an economic turnaround for Zimbabwe, and has said his nation is “open for business”.

But critics say the man nicknamed “The Crocodile” is moving too slowly on economic and political reforms, including repealing Mugabe-era laws that restrict the media.

Mnangagwa has also called for the lifting of U.S. sanctions against officials from the ZANU-PF ruling party, top military figures and some government-owned firms, which were imposed during Mugabe’s rule for what Washington called violations of human rights and democracy.

The IMF has said it would be difficult for the fund to support the country’s reform programme unless its $2 billion arrears with the World Bank, African Development Bank and European Investment Bank are paid.

Harare says that should be done in the next 12 months and plans a programme allowing the IMF to monitor its economic reforms, although it does not entail funding from the lender.

Analysts said the ongoing security crackdown could quell the protests for now, but more clashes were expected unless Mnangagwa’s administration could find a solution to the cash shortages.