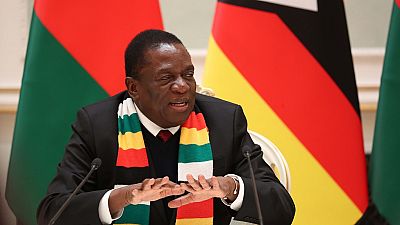 Zimbabwean President Emmerson Mnangagwa, has decided to skip the forthcoming World Economic Forum in Davos, Switzerland to be held between 22 and 25 January, 2019, and is heading back home “within the next 24 hours.”

In light of the economic situation, I will be returning home after a highly productive week of bilateral trade and investment meetings. We will be ably represented in Davos by Minister of Finance, Mthuli Ncube. The first priority is to get Zimbabwe calm, stable and working again.

With an online petition seeking to have him barred from Davos, as well as unconfirmed reports of his own party stalwarts clandestinely seeking to have him impeached back at home, President Mnangagwa has been left with little option but to cut short his stay abroad and head home.

President Mnangagwa’s return must be followed by an immediate suspension of the fuel price hikes, disbanding of the Cabinet and reconstituting the Executive.

Losing presidential candidate in the 2018 elections, Dr. Noah Manyika has welcomed reports that Mnangagwa has abandoned the Davos summit.

“It is the right things to do, if it’s true,” Manyika told Zimbabwean online portal ZOOMZimbabwe. “President Mnangagwa’s return must be followed by an immediate suspension of the fuel price hikes, disbanding of the Cabinet and reconstituting the Executive.”

new on #3mob] I am coming home – Mnanagagwa confirms he is skipping Davos https://t.co/upe1DtWTDc pic.twitter.com/x6uudadbeU

1) Who's he addressing? Social media remains banned in Zimbabwe

2) Was economy in rude health when he left Zimbabwe? pic.twitter.com/u2zclLuuq3

President Mnangagwa is reported to have been convinced by South African President Cyril Ramaphosa to head back home and extinguish the simmering heat. This comes after Mnangagwa ignored calls from Zimbabweans to abandon the Eurasia and Davos trip at the beginning of the week as tensions built up over hikes in fuel prices.

An online petition to Amnesty International entitled “Stop police and military brutality in Zimbabwe. Ban ED Mnangagwa from Davos” on the website change.org, created on 15 January, has attracted 59 990 signatures in just three days out of a target of 75 000 signatures.

It reads: “The president of Zimbabwe, Emmerson Mnangagwa, has lost legitimacy. Zimbabweans are suffering and the government has launched a crack down on personal liberties. The economy is collapsing. Health delivery has collapsed, yet he continues travelling around the world in posh private jet. On 14th January 2019, protesters have been brutalised by Zimbabwean security forces. Live ammunition has been used againt civilians. Emmerson Mnangagwa must be stopped from traveling to Davos from 22-25 January 2019. The international community must stop propping up a dictator.”

Thabitha Khumalo, chairperson of the MDC, said organizers of the Davos meeting should seriously consider blocking Mnangagwa from attending the World Economic Forum. said Khumalo: “A lot of people globally have signed that petition requesting that E.D Mnangagwa must be denied permission to participate in the Davos meeting because what we are saying is that Zimbabwe is burning economically, socially, culturally, you name it. We are saying he must come back home and correct the ills that have engulfed our country.”

#Zimbabwe President Emmerson Mnangagwa has cut short his international trip and will miss Davos after violent protests erupted across the country.

Across the Limpopo in South Africa, main opposition party the Democratic Alliance has threatened to approach the International Criminal Court (ICC) if President Cyril Ramaphosa fails to intervene directly to stop the ongoing human rights violations by the Zimbabwean government.

The DA called on Ramaphosa on Sunday to reconsider his “quiet diplomacy 2.0” and advise Zimbabwean president Emmerson Mnangagwa to stop the military clampdown on civilians.

“The DA strongly believes that the human rights crisis currently obtaining in Zimbabwe is of sufficient gravity to warrant an ICC investigation because, according to the Zimbabwe Human Rights NGO Forum, at least 12 people have been killed, 78 shot at and 240 faced assault, torture, inhumane and degrading treatment,” said Stevens Mokgalapa, the DA’s shadow minister for international relations and cooperation.

He added: “President Ramaphosa and his government seem intent on sitting on their hands over the Zimbabwe crisis in much the same manner as Thabo Mbeki’s failed diplomacy. In 2008, people were attacked and murdered with impunity in another state-sanctioned military clampdown targeting innocent civilians after a disputed election.

“Mbeki’s silence only served to worsen the human rights climate in Zimbabwe and led to a collapse of the economy, whose consequences are still being felt to this day with thousands of Zimbabweans flocking to South Africa to seek economic refugee.

“The DA will not stand by while Ramaphosa repeats a ‘Quiet Diplomacy 2.0’ strategy that is sure to produce the same results as Mbeki’s ill-thought foreign policy.”

The rebels are said to be considering a wildcard candidate to take over. Legally, Vice Presidents Constantino Chiwenga or Kembo Mohadi, the other Vice President, would assume the presidency on an acting basis until Zanu PF nominates a replacement, who could be a new name.

The rebels are supported by Zanu PF heavyweights who were sidelined by Mnangagwa from his Cabinet, among them former Finance Minister Patrick Chinamasa, Zanu PF chair Oppah Muchinguri and Obert Mpofu, the former Home Affairs Minister.