The government of Eritrea on Wednesday issued a strong condemnation of the terrorist attacks that has so far claimed 21 lives in Kenya.

The attacks in Nairobi has been claimed by Somalia-based terrorist group, Al-Shabaab. Asmara also referred to the attacks as heinous and cowardly.

“In a letter to his Kenyan counterpart, FM (Foreign Minister) Osman Saleh conveyed a message of condolence to the Government and people of Kenya & further underlined Eritrea’s support in eradicating this scourge,” Information Minister Yemane Meskel said in a tweet.

Ethiopia’s condemnation follows that of other governments in the region and across the continent. Leaders of Ethiopia – President and Prime Minister, Somali, Djibouti and Tanzanian presidents are among those that have so far sent condolences.

Eritrea had for long been accused of supporting the insurgents, a claim that Asmara repeatedly fended off. It was cited as part of the reasons for a 2009 United Nations Security Council embargo that was lifted last year.

A recently published book on Al Shabaab, however, indicates that Asmara did support the insurgents in cash and with logistics at a point in time.

The book, Inside Al-Shabaab – The Secret History of Al-Qaeda’s Most Powerful Ally was authored by a respected Somali journalist Harun Maruf and Dan Joseph, his colleague at the Voice of America, VOA.

The GOE has strongly condemned the heinous & cowardly terrorist attack perpetrated in Nairobi. In a letter to his Kenyan counterpart,FM Osman Saleh conveyed a message of condolence to the Government & ppl of Kenya & further underlined Eritrea's support in eradicating this scourge

Solidarity and compassion to our Kenyan brothers and sisters in the ordeal of the new terrorist attack.
The world must sympathize with #Kenya which pays a high price for its determination to protect the intl community from the misdeeds of terrorism in this part of the world.

On behalf of the Federal Democratic Republic of Ethiopia, Prime Minister Abiy Ahmed strongly condemns the senseless violent attacks committed on innocent civilians in Nairobi, Kenya. He expresses his condolences to the families of the bereaved, and to all Kenyans. UKenyatta

We condemn terrorist attack in Nairobi. Ethiopia stands in solidarity with government &people of our neighbor #Kenya. Our thoughts& prayers are with victims & their families. Have seen 1st hand Kenyan's undying resilience in the face of terrorism. They shall overcome UKenyatta

The government of the Federal Republic of #Somalia expresses its strong condemnation of the #terrorist attack on Tuesday at the #DusitD2 hotel complex in #Nairobi, #Kenya.
➡️?https://t.co/Z5p3OcWhBy pic.twitter.com/e2T8V9GtjI 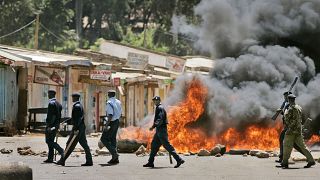