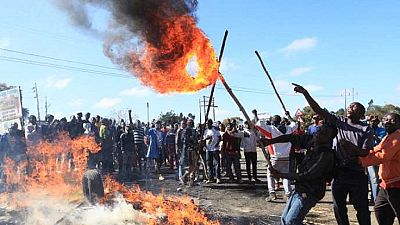 Business has been paralysed in the Zimbabwean cities of Harare and Bulawayo, following a call for a national stay-away and shutdown demonstration by the congress of trade unions (ZCTU).

ZCTU called upon Zimbabweans to stay away from their workplaces, businesses and schools from Monday to Wednesday, as a way of protesting ‘the general astronomical price increases since last year against stagnant salaries’.

‘‘After wide consultations, the ZCTU General Council resolved to call for a nationwide stay-away with effect from midnight today following the insensitive and provocative increase of fuel price by the President of Zimbabwe.’‘

The government has officially declared its anti-worker, anti-poor and anti-people ideological position.

The strike on Monday became violent as protesters barricaded roads and burned tyres in a suburb of Zimbabwe’s capital Harare, while police fired teargas to disperse youths protesting outside the high court in Zimbabwe’s second city of Bulawayo, according to video footage from the Centre For Innovation & Technology, a local news service.

In a televised address late Saturday, Mnangagwa said prices of petrol and diesel would more than double to tackle a shortfall caused by increased demand and “rampant” illegal trading.

The president’s announcement came after fuel shortages which began in October last year worsened in recent weeks with motorists sometimes spending nights in fuel pump queues that stretch for kilometres.

Rallying the nation against Mnangagwa’s govt

ZCTU said the government had demonstrated a lack of empathy for the already-overburdened poor.

“The government has officially declared its anti-worker, anti-poor and anti-people ideological position,” it said. “Workers’ salaries have been reduced to nothing and our suffering elevated to another level.”

Nelson Chamisa, who heads the opposition Movement for Democratic Change (MDC) said the situation was “descending into a humanitarian crisis”.

Evan Mawarire, a cleric and activist who led the 2016 anti-government protests that shut down major cities, added:

“You have cornered us and you leave us no choice. It’s time to mobilise every person who truly loves Zimbabwe.”

Teachers, who are not represented by ZCTU, are planning a nationwide strike from Jan. 22, and civil servants have threatened to join them.

The acute shortage of U.S. dollars has made it hard for President Emmerson Mnangagwa’s government to import not only fuel but also drugs and other goods.

Zimbabwe abandoned its own currency in 2009 after it was wrecked by hyperinflation, and adopted the greenback and other hard currencies such as sterling and the South African rand.

But now there is not enough hard currency to back up more than $10 billion in electronic funds trapped in local bank accounts, prompting demands from businesses and civil servants for cash that can be deposited and used to make payments.

Finance Minister Mthuli Ncube told a townhall meeting on Friday a new local currency would be introduced in less than 12 months.

“On the issue of raising enough foreign currency to introduce the new currency, we are on our way already, give us months, not years,” he said.

Locals are haunted by memories of the Zimbabwean dollar, which became worthless as inflation spiralled to reach 500 billion percent in 2008, the highest rate in the world for a country not at war, wiping out pensions and savings.

Mnangagwa is under pressure to revive the economy but dollar shortages are undermining efforts to win back foreign investors sidelined under his predecessor Robert Mugabe.

On Sunday, the president set off on a five-nation tour that starts in Russia and ends at the World Economic Forum in Davos, Switzerland.