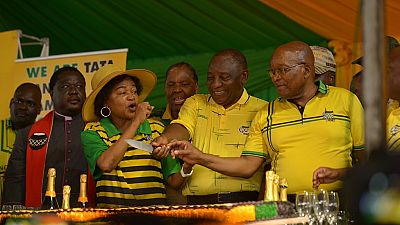 While South Africa’s president, Cyril Ramaphosa addressed delegates at events marking the 107th birthday of the ruling party, it was ex-president Jacob Zuma who received all the verbal support, ahead of key national elections in May.

Party supporters chanted “Zuma! Zuma!” after Ramaphosa finished his hour-long speech, which is perhaps not surprising considering the events were held in the former president’s stronghold province of KwaZulu-Natal.

Ramaphosa and Zuma sat next to each other, in a show of unity, following years of tense factionalism in the African National Congress (ANC).

I'm delighted that today we are also here working with our former president... showing a real face of unity.

“I’m delighted that today we are also here working with our former president… showing a real face of unity,” Ramaphosa told party activists.

The ANC heads to the polls in May in elections that it is forecast to win.

But the party of Nelson Mandela has been weakened by corruption scandals, factional in-fighting and the country’s poor economic performance.

Ramaphosa took power last year after Zuma was forced to resign by ANC lawmakers when he lost control of the party’s internal power struggle.

Under Zuma, the ANC suffered in popularity winning less than 54 percent of the vote in local elections in 2016 — its worst electoral performance since coming to power in 1994. It also lost control of key cities including Pretoria and Johannesburg.

An IPSOS survey published last week predicted that the ANC would secure around 61 percent of the vote in the general election.

Ramaphosa said Zuma still had a role to play in the party, adding he “has always worked and is working hard for the ANC”.

Zuma faces 16 charges of fraud, corruption, and racketeering related to a 1990s arms deal struck when he was deputy president.

A judicial investigation is also probing alleged nepotism and corruption during his years as president.

Zuma retains influence in the ANC, particularly in KwaZulu-Natal province.