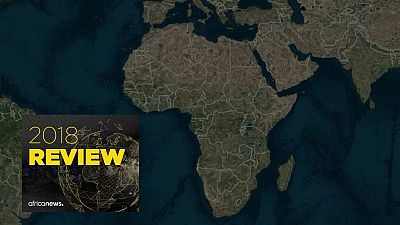 A special tab on the Africanews homepage ‘2018 Review’ is LIVE with a pool of articles and photo stories looking back at the year. We are using an alphabetical arrangement in respect of country reviews. This part concentrates on South Sudan – Zimbabwe.

Years of war ended this year with the signing of a new peace deal in Addis Ababa under the aegis of the regional body, IGAD.

Then there was a return to the capital Juba by former vice president Riek Machar. The deal had considerable regional support from leaders of Sudan and Uganda especially.

The year also saw spike in insecurity at different times as government and rebel forces clashed. The resulting humanitarian situation was also a major highlight of events in the country.

A report noted that Uganda and Sudan had helped South Sudan government to bypass an arms baby supplying warring factions with ammunition used in combat.

A South Sudanese doctors also won a UN award for his work in supporting displaced populations.

Khartoum announced this year that it had made peace with rebels in parts of the country. But with one problem seemingly solved came the biggest headache of the year in Sudan.

Bread protests earlier this year. Thousands took to the streets in what was morphing into an anti-government protest against rising cost of living. It wasn’t long before government backtracked on cause of the price hikes.

Months on, the bread protests have returned with a more nationwide outlook. It has also merged with cost and unavailability of fuel in the country. Some regions have opted to use state of emergency in the wake of the protests.

President Al Bashir was also key in South Sudan peace talks. His arrest warrant from the ICC came up as countries expected to arrest him, welcomed and allowed his out without hustle. A typical case being Jordan.

The southern African country started the year as Swaziland but had a name change announced and effected over the course of the year. King Mswati announced the country was to be known as eSwatini at the independence day celebrations.

The country remains the only African country that continues to recognize Taiwan as an independent country. Burkina Faso abandoned that position in what is seen as increasing pressure by Beijing.

Local elections, branded as cosmetic were held across the country where the king remains an absolute monarchy who exercises political authority.

The king named a new Prime Minister – a former MTN executive – who has since began ringing changes in government opting for austerity measures to contain spending amid an economic crunch.

Tanzania had amid year to mourn after a ferry capsized on Lake Victoria killing scores of people. The cause of the accident was due to overloading. Government ordered arrests and an inquiry.

The country had to backpedal on ban of pregnant schoolgirls. The move threatened to cost the country a World Bank support running into millions of dollars. Both parties have since agreed on common grounds.

The president was again prominent in the wake of cashew price war. After buyers failed to up prices to farmers on Magufuli’s request, he ordered the military to buy all harvested cashew, that govt will pay farmers a higher price.

Anti-government protests largely slowed down for the better part of the year. Late on, one such protest turned deadly after security forces reportedly discharged live ammunition.

The stalemate in Ghana-led talks between government and opposition meant that tensions remained palpable in the country.

Opposition have flatly refused to participate in the legislative polls as have they rejected the referendum vote meant to okay constitutional changes especially for a two term presidency.

Togo also had the unique position of being the only African country that backed the US in a controversial vote to recognise Jerusalem as capital of Israel. The vote flopped with majority of African countries turning their back on the US, a handful others abstained.

Tunisians protested economic issues across the country clashing with security forces when they took to the streets.

Government assured that it was doing everything possible to remedy the situation. Cabinet reshuffles were undertaken with a most recent one ushering in the first Jewish minister from the largely Muslim nation.

A Tunisian activist was also named the African Union’s first youth envoy as part of efforts to get young Africans involved in the affairs of the AU.

President Essebsi was also present at most Libya crisis meetings and gatherings that discussed migration issues.

It all started from the chaos of 2017 debate on lifting presidential age-limit. The controversial bill was passed into law this year and a court challenge of the vote failed. Then the social media tax protest kicked in, again with Bobi Wine in the lead.

Police shot and killed Bobi Wine’s driver according to him in an attempt on his life. His arrest, torture and arraignment before a military court made headlines as did his release and rearrest.

He was charged for treason before a magistrate court. Blocked from leaving for medical treatment in the US. When he got to go, jabbed government each step of the way till his return. His return was another leg to spectacle as he was escorted home by police.

Like Tanzania, Uganda also mourned deaths resulting from a boat mishap caused by overloading. There were also mudslides that affected people in a part of the country.

Zambia endured a tough year with lots of back and forth over Chinese involvement in the affairs of the country.

Protests broke out after a report alleged that the Chinese were to take over a utility supply company because of debts Lusaka owed to Beijing. The government denied the allegations. The amount of debt owed was also disputed by government.

The opposition continued to give government a tough time over China related issues. Claims by main opposition leader Hakainde Hichilema led to a police arrest order.

A government run daily published one of its top stories in two languages – English and Mandarin. Government defended the move saying the paper was expanding its readership base.

Late this year, the top court ruled that President Lungu could run for a third term in office. Lungu won elections to replace deceased president Michael Sata then served out his term. He then won a full first term in 2016.

Incidentally it was a group of opposition parties that went to court to fight for the brief first spell to be squashed and to allow him run for a second and final term when next polls are organized.

November 21, 2018 marked the first anniversary of the post-Mugabe era. But roundly it’s been a topsy turvy year even without Mugabe.

The first post-Mugabe polls turned out to be very keenly contested with the ruling Zanu-PF winning the presidency and dominating parliament despite not having Mugabe’s support at the time of the vote.

An economic crisis continues to rile the country after years of economic chaos. The main opposition is and so actively challenging the legitimacy of President Mnangagwa.

Zimbabwe suffered a cholera outbreak after the polls which all but worsened the crisis in which people especially in urban areas found themselves.

A number of deadly road accidents also claimed heavy casualties while government had eggs over its face about an oil deposit discovery that actually wasn’t true.