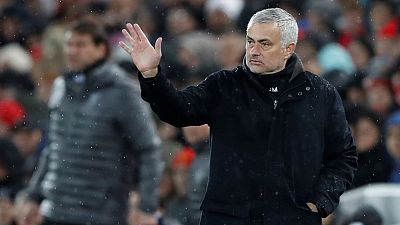 Manchester United has sacked its manager Jose Mourinho, following a dismal start to the 2018/19 season.

The English club side announced on Monday, that it was partying ways with the 55-year-old Portuguese gaffer, who has been with the club since 2016.

‘‘The club would like to thank Jose for his work during his time at Manchester United and to wish him success in the future,’‘ read part of the statement.

The club would like to thank Jose for his work during his time at Manchester United and to wish him success in the future.

Manchester United has announced that Jose Mourinho has left the Club.

We would like to thank him for his work during his time at Manchester United and wish him success in the future. #MUFC

The statement added that a new caretaker manager would be appointed to run affairs at the club, until the end of the season.

United are sixth in the table with 26 points from 17 matches. The club is 19 pints behind Premier League leaders Liverpool, who they lost to (1-3) last weekend.

With ManUtd 19 points behind LFC after 17 games, with the vast majority of players playing way below their best…and dour football to boot. Given Mourinho was allowed to spend hundreds of millions on those players the split seemed inevitable.

Mourinho was sacked on December 18th 2015 by Chelsea after losing 3-1 to Klopp's Liverpool.

Today, 18th December 2018, Mourinho gets sacked by United after losing 3-1 to Klopp's Liverpool…

Where is that #MourinhoOut party? I'm in the mood to start drinking alcohol NOW!!!!!!!!!

The after party of Jose’s exit will be at manifestive #Manifestivities18 on Dec 23. Thank you! ????‍♀️

I will always love you Mou.❤️❤️ Life happens and somethings have to be.