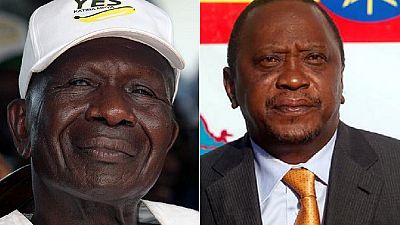 The appointment of the 91-year-old veteran politician was not well received by many Kenyans, who argued that the president should have selected a candidate from the larger pool of young people.

Kenyatta, however defended his decision, saying he chose Awori over ‘young people’, in the interest of securing the fund from corruption.

I would rather stick with the old man who will guard the money and ensure it is used in the right way.

‘‘If you see how young people we have trusted with positions steal public money, I would rather appoint somebody like Awori whom I am sure will protect your money and ensure it is used in the right way,’‘ the president said.

In May, authorities charged more than 50 people, most of them civil servants, in relation to the theft of nearly $100 million of public funds from the National Youth Service, a government agency.

The president went ahead to caution young people, saying they should aspire to make money the right way.

“Success in business and being a successful entrepreneur is not how fast you make money, don’t be fast to make money because that results in your taking shortcuts which tomorrow you will regret in life,” said Kenyatta.

The Sports, Art and Social Development Fund is charged with developing infrastructure and facilitating Kenya’s national teams on their official assignments.