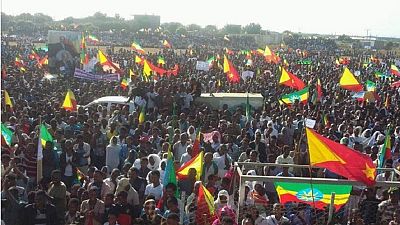 A rally has been planned for Ethiopia’s northern Tigray regional state’s capital, Mekelle, on Saturday. Dubbed ‘Respect the Constitution,’ it will be the second such in a space of three weeks.

The regional state is behind the rally targeted at the federal government led by Prime Minister Abiy Ahmed. Recent arrests of former Tigray generals accused of corruption is largely behind the rally.

The first rally took place on November 25 in Mekelle and other cities and towns in the state. Protesters bearing the nationals and regional flags denounced federal judicial process which they said were biased.

We do not compromise on the issue of rule of law, all of us should be accountable for our actions, but the mass arrests should not be used as a cover for political aims.

Debretsion Gebremichael, chairman of the Tigray People’s Liberation Front (TPLF), a bloc in the ruling EPRDF coalition is on record to have accused Abiy of conducting ethnic profiling in the name of fighting corruption.

He said the arrests of senior military officials was politically motivated and implemented along ethnic lines. “The arrests… targeting individuals accused of corruption and human rights has veered from course and is being used to bring Tigrayan people to their knees,” Debretsion claimed.

The TPLF is a founding member of the long-ruling Ethiopian People’s Revolutionary Democratic Front (EPRDF) in which Tigrayans have traditionally held the reins of power, despite accounting for only around six percent of the population.

The appointment of Abiy, an Oromo, in April and his breakneck implementation of reforms has loosened the Tigrayan grip on government, stirring resentment in some quarters.

Debretsion claimed to discern “a hand of a foreign country” in the arrests, without naming the state he was referring to.

“There is a foreign involvement in the process. Thus, it is unacceptable,” he said, without giving further details.

Among those so far arrested are a former deputy spy chief and the former head of the military-owned Metals and Engineering Corporation (METEC).

“While Kinfe was arrested peacefully, they tied him handcuffs. This is a political attack,” Debretsion told a news conference.

“While they should have gone after an individual, they went after an ethnic group and a party,” he said in comments aired by Dimtsi Woyane TV.