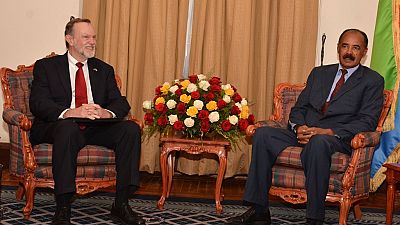 The United States and Eritrea have reiterated their commitment to building warm bilateral relations, and pursuing issues of mutual interest in the Horn of Africa region.

The Assistant Secretary of State for African Affairs, Tibor Nagy, who is on a tour of Eastern Africa, met with Eritrea’s president Isaias Afwerki on Tuesday.

Eritrea’s information minister, Yemane Meskel, shared on Twitter, the commitments made by the two leaders.

Both sides further agreed to work together to consolidate the Eritrea-Ethiopia Peace Agreement.

Yemane added that Nagy reiterated the decision of the United States to strengthen ties with Eritrea.

‘‘Both sides further agreed to work together to consolidate the Eritrea-Ethiopia Peace Agreement.’‘

Eritrea and the United States have had a frosty relationship, as the former accused Washington of championing the campaign to impose sanctions on Asmara.

The sanctions were lifted last month, even as Eritrea insisted that the United Nations Security Council should do more to make amends for the negative impact sanctions had on Eritreans.

The US has previosuly accused Eritrea of detaining American citizens for politically-motivated reasons, purchasing weapons from North Korea and violating the human rights of its citizens.

Nagy is scheduled to meet Eritrea’s foreign minister, Osman Saleh and other officials.