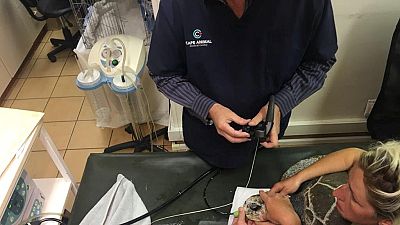 A turtle washed up on a Cape Town beach South Africa,had a large plastic bag pulled from its throat by a veterinarian at a Cape Town aquarium, the footage of the operation filmed by the rescue team showed.

After being found on Struisbaai beach, the 23kg green sea turtle was brought to the Two Oceans Aquarium where an X-ray confirmed that its laboured breathing was caused by a blockage in its throat.

According to the aquarium, Dr Malan van Zyl was called upon to help after it was established that he had the only endoscope in the city which was thin enough, long enough, could blow air and had the gripping abilities to perform the procedure.

The vet scanned the turtle before removing the plastic sheet from its mouth with forceps, footage from the November 29 operation showed.

The turtle is still in critical condition and is being monitored as part of the Turtle Rehabilitation and Release Programme, the aquarium said in a blog post posted on November 31.