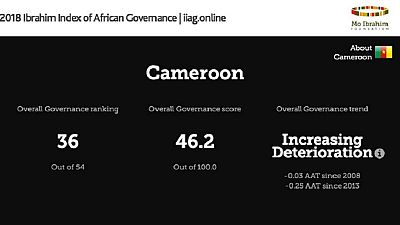 The Mo Ibrahim Foundation has expressed concern over the ‘escalating’ confrontation between Cameroon’s security forces and separatists in the Anglophone regions of the country.

The foundation which ranks African countries on governance trends, issued a statement on Monday, calling on the warring parties to resolve the crisis through dialogue.

‘‘The Foundation urges all parties to come together to promote ethnic and religious understanding and engage in meaningful dialogue to find a nonviolent solution,’‘ read part of the statement.

The 2018 Ibrahim Index of African Governance, published a few weeks ago, showed a decline in Cameroons’ safety and rule of law over the last 5 years.

The 2018 #IIAG highlighted #governance challenges in #Cameroon. We encourage its leadership to connect with its #youth & intensify efforts to increase safety, peace and opportunity to its citizens. Find out more about ??‘s performance in the #IIAG: https://t.co/MsvpmG1CMS pic.twitter.com/2UsHJS5HvU

The Foundation urged Cameroon’s governments to ‘connect more with its young population’, saying a peace in the country is vital for the region and the African continent.

Meanwhile, ten Cameroonian separatist leaders extradited from Nigeria earlier this year will face trial next month on terrorism charges, according to one of their lawyers.

The accused include Julius Ayuk Tabe, the leader of an Anglophone separatist movement in western Cameroon fighting to break away from the Francophone-dominated central government.

“Ten charges have been brought against them, including terrorism, advocating terrorism, secession, civil war and revolution,” lawyer Christopher Ndong told Reuters after the charges were read out at the capital Yaounde’s military court on Tuesday.

The trial is scheduled to begin on Dec. 6, Ndong added.

Hundreds of people, including civilians, separatist fighters and Cameroonian security agents, have been killed in the past year’s violence, which has emerged as the most serious security threat to President Paul Biya, in power for 36 years.