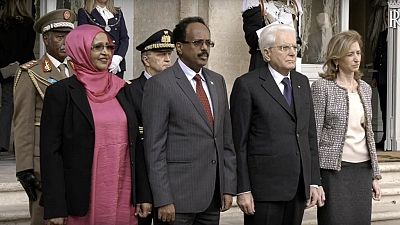 Mohamed Abdullahi Mohamed Farmaajo, Somali president has been holding high-level meetings with the Italian government since arriving for a three-day official visit.

The presidency, Villa Somalia, announced the president’s trip on Monday stating that he was due to undertake the state visit in view of bolstering ties between the two nations.

“Somalia and Italy maintained strong friendship based on mutual interests, trust and respect. Italy is one of Somalia’s reliable allies,” Villa Somalia said in a tweet.

Farmaajo has since his arrival in Rome held bilateral talks with Italian Prime Minister Guiseppe Conte stating that the fruitful discussions were on strengthening our two sides bilateral talks.

On Wednesday, he met with President Sergio Mattarella at the Quirinale Palace. “The Presidents discussed how Somalia and Italy can collaborate to transform historic relations into win-win economic partnerships on many fronts of mutual interests,” a tweet from the presidency added.

Relations between the two nations date back to when Italy were colonial masters of the dominantly Muslim nation. The last visit by the Italian PM to the Horn of Africa region saw him make stops in Eritrea and Ethiopia.

Grateful to President Mattarella, PM guiseppeconte and both Houses for an exceptional hospitality accorded to me and my delegation during this significant State Visit. Somalia and Italy can achieve more together for the mutual benefit of our respective people. Grazie! pic.twitter.com/eBQHbLgj18

Honoured to have held fruitful discussions with PM guiseppeConteIT in Rome today on strengthening our two sides bilateral ties.

Somalia and Italy have a strong historical foundation for modern partnership in all areas of common progress that we seek to cement further. pic.twitter.com/2hyR5U7BQv