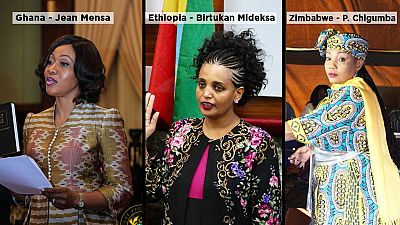 In a time where there is continued talk about the strikingly low involvement of women in top political and national leadership positions across Africa, the status quo continues to change at a steady pace.

Until October 2018, Africa did not have a female president. Then from Ethiopia emerged Sahle-Work Zewde who made history as the country’s first woman president. The ‘twin’ female veeps remain Tanzania’s Samia Suluhu and Zambia’s Inonge Wina.

Whiles presidential elections year in and out produce men as leaders, a keen observer will notice that the people who organized and declared presidents were also largely men.

Out of about a dozen polls since 2016, there has been only two women. Charlotte Osei who handled Ghana’s December 2016 general elections and Priscilla Chigumba, a former High Court judge who oversaw Zimbabwe’s July 2018 polls.

Osei has since been relieved of her post on stated misconduct. In her place, the government settled on another woman in the person of Jean Mensa to steer the affairs of the Electoral Commission, EC. Her first major task is when Ghana next goes to the polls in December 2020.

The big news in the area is again, from Ethiopia, with Prime Minister Abiy Ahmed’s nomination of a new elections board head in the person of Birtukan Mideksa. She thus joins Chigumba and Mensa as the three female election chiefs on the continent.

Birtukan will be expected to lead the team that prepares and delivers Ethiopia’s 2020 elections which PM Abiy insists will be free, fair and transparent.

She recently returned from exile in the United States where she had been residing since fleeing Ethiopia in 2010. She was a judge whose work irked the then government.

She switched to politics and found herself in jail after disputed elections in 2005. She was jailed for life in 2008 but released two years later.

After President Sahle-Work took over the ceremonial role from Mulatu Teshome, another big one for women was the appointment by lawmakers of Meaza Ashenafi as Chief Justice of the Federal Supreme Court of the country – another historic move.