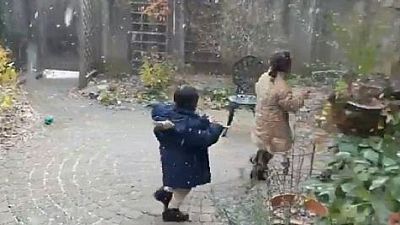 The 42-second video posted by one Rebecca Davies showed the kids, a boy and girl, jumping around in jackets in light snow downpour reportedly in Toronto. It has since garnered close to 2.6 million views.

The PM’s response came o, English and French: “Amazing – now convince them that shoveling is fun and you’re all set. Thank you for everything you do, Rebecca. #WelcomeToCanada.”

Trudeau and Canada’s open-door policy to refugees is the direct opposite of what happens next door in the United States where Donald Trump continues to tighten entry rules.

Eritrea has long been labeled as a country that produces refugee seeking migrants, a claim that the government continually dismisses. Persons leaving are said to be doing so because of the political situation back home plus harsh economic conditions.