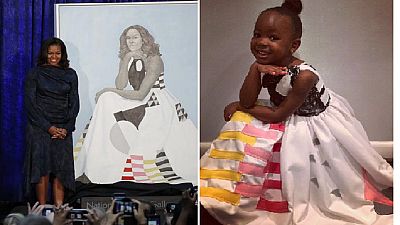 <p>Former United States First Lady Michelle Obama on Thursday celebrated a young girl who remade Mrs. Obama’s official portrait in a Halloween look.</p> <p>Quoting Parker Curry’s tweet that asked people to guess who she was, Michelle wrote: “You nailed the look, Parker! I love it!!!!”</p> <p>Little Parker’s photo is reminiscent of Michelle’s portrait lodged at the Portrait Gallery in Washington DC. It was unveiled in February 2018 along with that of Barack Obama.</p> <p>She wears a colourful flowing dress and rests her cheeks on her right hand with a smile – just as did Michelle in the portrait put together by artist Amy Sherald. </p> <blockquote class="twitter-tweet" data-lang="en"><p lang="en" dir="ltr">You nailed the look, Parker! I love it!!!! ❤️ <a href="https://t.co/40CArze8gT">https://t.co/40CArze8gT</a></p>— Michelle Obama (@MichelleObama) <a href="https://twitter.com/MichelleObama/status/1057999275840417792?ref_src=twsrc%5Etfw">November 1, 2018</a></blockquote> <script async src="https://platform.twitter.com/widgets.js" charset="utf-8"></script> <p><img src="https://static.euronews.com/articles/58/10/581075/1024x576_bonus-MOO.jpg" alt="" /></p> <p>The evening before All Saints’ Day; often devoted to pranks played by young people. The day falls on November 1 and is marked as a Christian feast day honouring all the saints; first observed in 835.</p> <p>It is more famed with people wearing rather scary disguises to parties even though Parker’s outfit was a more pleasant and appealing one, one that got the attention of her older “duplicate.”</p>