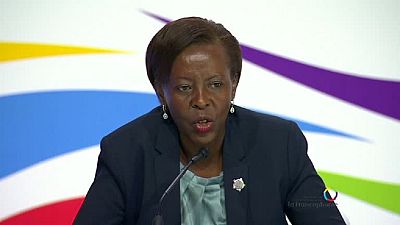 Rwanda’s former foreign affairs minister Louise Mushikiwabo, says the country is determined to lead the mission of extending the global influence of the French language, as mandated by the International Organisation of La Francophonie (OIF).

Mushikiwabo, who was recently elected to lead OIF, has been recently tweeting in French, and told The East African newspaper that ‘we’re combining nicely both French and English’.

‘‘Don’t be surprised if you see more and more non-French-speaking Rwandans going to French, because we’re now going to lead this organisation for the next four years,’‘ Mushikiwabo said in the interview.

OIF says there are some 274 million French speakers worldwide, making it the fifth most widely spoken language.

Africa is home to the world’s biggest French-speaking population, with 31 of the continent’s 54 nations having French as an official language, a legacy of French and Belgian colonial power.

Rwanda, which previously fell out with France over the latter’s role in the 1994 genocide, took a decision to replace French with English as the official language in 2008.

Despite Rwanda’s loud estrangement with France and a questionable human rights record, Mushikiwabo was unanimously elected as secretary-general of OIF, riding on the backing of France and the African bloc.

‘‘We moved to English because that is where our economic life, which is mostly in East Africa, lies. But it didn’t take away our French speaking heritage,’‘ explained Mushikiwabo.

She also sought to highlight the significance and benefits that would accrue to Rwanda, East Africa and the continent at large, during her tenure.

‘’…the OIF is now made up of 88 countries. Any gathering of such a diverse and talented people is of great interest not only to Rwanda but also to East Africa,’‘ she said.

‘‘We’ve seen that in the last couple of years, we’re slowly as a continent coming together to speak with one voice where the interests of many of us on the continent converge. So that’s critical.’‘