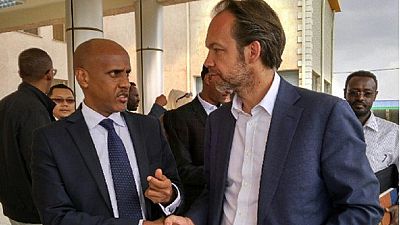 The United Kingdom has officially addressed reports that it had at a point supported Ethiopia’s notorious paramilitary unit, the Liyu Police.

The meeting according to the British Embassy in Addis Ababa centered around security reforms whiles Rogg took the opportunity to dispel resurfaced reports that the DFID had back in 2013 funded Liyu police.

Planned support to improve security in the region was not implemented. The UK government has not funded the Liyu police. The Peace and Development Programme ended in 2017.

Omer in August took over as head of the SRS after former head was arrested over rights issues. He has promised to uphold rights and freedoms in the region that has suffered highhanded leadership since 2010.

The UK Guardian in January 2013 reported that an internal DFID document had entered a tender to train security forces in the Somali region of Ethiopia, as part of a five-year £13m–15m “peace-building” programme.

The statement read as follows: “The British Embassy is aware of some reports circulating on social media referencing reporting from five years ago which speculated on sources of funding for the Somali Regional Special police, commonly known as the Liyu police.

“Press reporting in 2013 focused on DFID’s Peace and Development programme. The programme intended to support development and reduce conflict in Somali Regional State.

“It helped thousands of children attend primary school and increased access to health services and clean water. It provided legal aid and specialist legal support, particularly for women and children.

“Planned support to improve security in the region was not implemented. The UK government has not funded the Liyu police. The Peace and Development Programme ended in 2017.”

Abdi Illey became the president of Somali Regional State in 2010, and the Liyu police continued to report to him till his arrest in August. He is currently facing a legal process instituted by federal government.