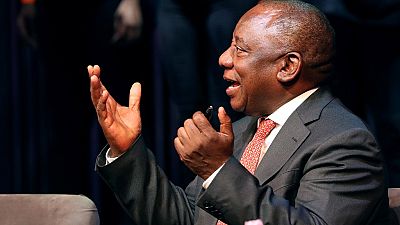 South Africa’s opposition politician Julius Malema of the Economic Freedom Fighters (EFF) will on Tuesday address allegations that his party benefited from fraud in the black-owned VBS Mutual Bank.

Malema, whose party has fashioned itself as a champion of the economic, social and political rights of black people in South Africa, is under pressure to absolve EFF and its senior members from the scandal that saw up to 1.9 billion rand ($132 million) being illegally siphoned from VBS Bank.

A report commissioned by the central bank titled “The Great Bank Heist” found the money had been looted by several people from VBS, a small lender that bailed out former president Jacob Zuma after a corruption scandal.

The Presidency categorically rejects reports that ... Ramaphosa failed to take action on the VBS Bank saga despite being alerted to irregularities back in 2017.

The country’s president, Cyril Ramaphosa, was also forced to reject a newspaper report that claimed he was informed of the looting at VBS and failed to take action.

The president’s office on Monday described the report by City Press newspaper as ‘baseless and unsusbatantiated’.

“The Presidency categorically rejects reports that … Ramaphosa failed to take action on the VBS Bank saga despite being alerted to irregularities back in 2017,” his office said.

Both the president and the EFF have insisted that prosecutors should take action against the culprits.

VBS in the spotlight

The bank was thrust into the spotlight in 2016 when it provided a 7.8 million rand loan to Zuma to reimburse the state for upgrades to his private residence, after an outcry over lavish improvements including a swimming pool and amphitheatre.

In a ruling that hit Zuma financially and politically, the Constitutional Court ordered him to return some of the $16 million spent on enhancing the residence.

The report by the central bank released last week on its website said VBS was “corrupt and rotten to the core”.

In March, VBS was placed under curatorship by the central bank because of liquidity issues, meaning it can appoint an administrator to run the bank.