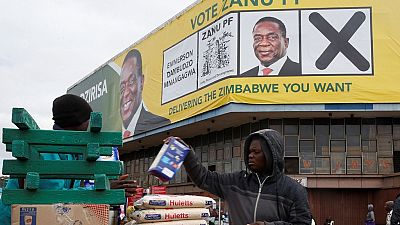 Zimbabwe’s ruling party has dismissed the European Union Observation mission (EUEOM) report on the July 30 elections, describing it as a an ‘MDC-Alliance script’, reports the state run Herald.

EUEOM released its final report and recommendations to the country on Wednesday, with a view of positively contributing to Zimbabwe’s electoral management process.

“These recommendations are offered to help address a number of the shortfalls outlined in this report, including problems with the legal framework, the role of the electoral commission, and various abuses of human rights and political rights of the opposition,’‘ said the EUEOM chief observer, Elmar Brok.

The ZANU-PF legal secretary, Paul Mangwana said the party is happy to have met the standards of the observer missions from the African Union and the regional SADC bloc.

“It is their opinion and it remains so. We are measured by Sadc and AU standards and we met those standards. The AU and Sadc said so. We cannot be measured by standards we know nothing about,” he said.

While the observers noted the peaceful campaign process, and increased freedoms of expression, assembly and civic participation, it nevertheless had recommendations in the key areas of;

Independence of the electoral commission (ZEC)

EUEOM proposed timely relay of information by ZEC to enhance confidence in the process. The delay by ZEC to release provisional results of the presidential election was one of the factors that could have led to the deadly opposition protests in the aftermath of voting.

“The EUEOM suggests in order to enhance confidence in the process, to strengthen the independence of ZEC,’‘explained the Chief Observer.

“To improve the legal framework for the elections, legislation should be brought into line with the 2013 Constitution; and appropriate time limits for the determination of pre-election disputes need to be established”, added Brok.

Inclusiveness of the process

“To make the electoral process more inclusive, areas of under-registration of voters need to be addressed; and Multi-Party Liaison Committees need to be used more effectively”, concluded the Chief Observer.

The opposition’s Chamisa in a tweet, described the EUEOM’s report as accurate.

This EU position is so accurate! https://t.co/zjLtOCGHPw